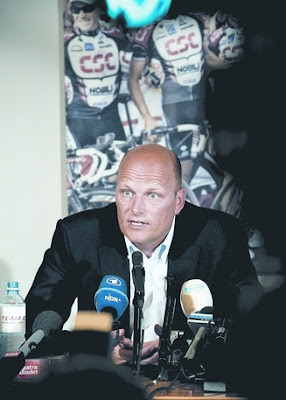 In connection with the debate, which has taken place over the last few days, Bjarne Riis would like to make the following comment:

”First of all I would like to say that I strongly object to the accusations made in the interview with Jörg Jaksche by the German magazine, Der Spiegel.

I have not had any knowledge of, nor have I encouraged the use of illegal substances by Team CSC riders. I trust our doctors one hundred percent and my riders and staff can confirm that we have always taken an uncompromising stand in relation to doping. My conscience is clean, but if Jörg Jaksche has another view on the matter, he needs to present documentation in proof of his allegations.

I am upset by the fact that my team, my staff, my riders and especially our sponsors are confronted by these allegations on a daily basis, and I am also upset that I have become the target of such accusations following my public confession. I came forward in order to wipe the slate clean not to claim the responsibility for other people's mistakes. They alone have that responsibility.

It bothers me a great deal that the ground breaking and sincere work Team CSC is doing to fight doping has to be compromised by speculations such as these. The project does not deserve that, because I know we are fighting harder than anyone else to try and rid the sport of doping and my riders and our sponsors deserve credit for that.

There has not been a moment's peace from the press since I came forward. Of course I appreciate the fact that everyone is entitled to their own opinion on these matters, but I have no wish for my team – which has nothing to do with my mistakes – to become a target on false grounds. My riders work hard to fulfill our mutual ambitions and like always they are very focused ahead of Tour de France.

At the moment I am surrounded by so much turbulence and I do not wish for this to have a negative effect on the focus or in any way influence the atmosphere surrounding the team during such an important race as the Tour de France.

For the next three weeks the riders and Team CSC have the right to concentrate fully on Tour de France, and the debate regarding me and the allegations made against me will have to be taken elsewhere. With that in mind I have chosen not to participate in this year's edition of the Tour.

It has been a very difficult decision, but it is mine alone and is not made because of pressure from the outside, nor does it in any way reflect on whether there is any truth to the allegations, which there is not.

I know that I have a very competent and extremely motivated team for this race and I am confident that my sports directors will do a brilliant job,” says Bjarne Riis.
Posted by Recovox at 9:45 AM