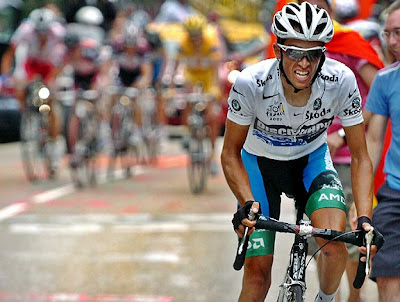 “It’s been a pretty good day, but the third week of the Tour remains”

At the end of the Albi time trial today, Alberto Contador found himself in third place in the GC, with only Rasmussen and Evans in front of him. “If you take a close look, it’s been a pretty good day in regards to the other important riders. Only Rasmussen surprised me with the great time trial he did.”

Contador had confidence in his chances before the start. “I knew that if I had a good day I could be in this situation, because my goal was to lose no more than 1:30 on the best of the GC, and I met that goal. On the other hand, there were others that lost a lot of time. I was surprised by Valverde, who was good in the Dauphiné TT, and also by Sastre.”

Contador didn’t feel handicapped by the rain, but still chose to play it safe. “I knew I couldn’t take risks, and I got through it. In spite of that, I had two scary moments. But I chose to lose a few seconds rather than risk falling down. I didn’t like the rain because of the risk, but physically it was almost good for me. Today I was concentrating really well, and the rain never worried me.”

Alberto’s forecast for the Pyrenees? “I want to continue just as I’ve done so far. Today I’ve gotten through an important and positive stage for me, but the third week remains, and the very difficult Pyrenees. I hope that tomorrow I don’t pay the bill for today’s efforts, and can be with the best in the last climb.”

As of now, he’ll gauge his efforts against the performances of Cadel Evans and Andreas Klöden. “They’re the most imposing of the favorites, although now others will attack from the far flanks, like Astana and others. But for me, those two are the wheels to monitor. Rasmussen is very strong, too, but I think if I gain a little on him, it’s possible to take him in the last time trial.”
Posted by Recovox at 1:50 PM