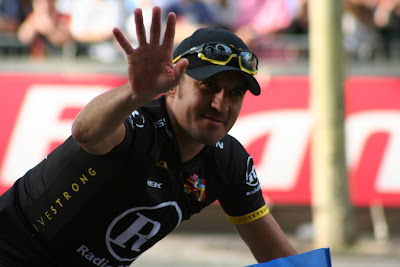 Lance Armstrong’s teammate Yaroslav Popovych has been subpoenaed to testify before a grand jury in Los Angeles on Wednesday as part of the on-going investigation into doping in cycling.

Popovych is a loyal, long-term teammate of Armstrong, riding with him at the Discovery Channel, Astana and RadioShack teams. His lawyer Ken Miller told the Associated Press of the grand jury appearance but declined to give further details.

In recent weeks, the federal prosecutors have subpoenaed several of Armstrong's former teammates and associates including coach Allen Lim and Stephanie McIlvain, who was an Oakley representative who worked with Armstrong early in his career.

Federal investigators have always refused to comment on the investigation, which is headed by Food and Drug Administration agent Jeff Novitzky.

He is expected to travel to Europe to possible question other people as part of the on-going investigation. Novitzky is famous for his tenacious role in the BALCO investigation into drug use in baseball and athletics.
Posted by Recovox at 8:51 AM

i always wanted to ride a bike, but i fear that the chain will fall off.