Lance Armstrong's Rotorua entry out of the blue 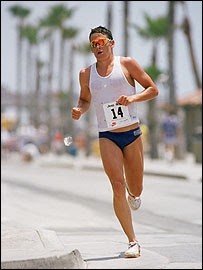 There it was, just the third entry received. Lance Armstrong. As usual, quick off the mark. Rotorua triathlon officials figured someone must have been having them on.

Turns out it wasn't a joke. The 39-year-old seven-time winner of the Tour de France was coming to New Zealand for the first triathlon of his post-cycling sporting career.

And he had picked the 25th anniversary of the Blue Lake Multisport Festival in which to dip his toes back into the waters of triathlon.

You could have knocked the Rotorua race organiser over with a feather. There she was thinking Bevan Docherty or Cameron Brown would be a marquee entry to mark the occasion.

Instead she got arguably the greatest road cyclist of all time. Certainly one of the most controversial.

It's a great story, too, how it emerged the tough Texan who overcame testicular cancer to dominate the most gruelling cycling event on the planet had picked a Rotorua weekend extravaganza, aimed more at the enthusiast than the elite, to kick off the triathlon phase of his career.

The murmurs started last Friday afternoon when Armstrong tweeted the co-ordinates and late-January date of his first triathlon, following on from his cycling farewell in the Tour Down Under.

Event organiser Charlotte Pearson received a call from a reporter who just happened to be a member of the Rotorua Association of Triathletes suggesting Armstrong would be on the start line.

"She called about 5 o'clock that afternoon and I didn't believe her," Pearson said yesterday. "I didn't think much of it till the next day when I checked the entries."

It turned out Armstrong had entered at 2pm on Friday, an hour before he tweeted his first teaser about his plans. There were only two names ahead of him.

But still Pearson wasn't certain. "The fact that he had entered before the tweet went out made me think it must be him. But I got in contact with his publicist and they confirmed it."

Suddenly a grassroots-style event had gone through the roof.

"It's been crazy really," said Pearson who spent much of yesterday fielding media calls.

It had also become clear that her little old event was about to become "kind of a big deal".

The event normally attracts around 300 entries. Pearson was figuring now on having to cap the field at around double that. Suddenly a road traffic plan would be needed, a media liaison would have to be appointed.

"We normally just get someone along from the local paper, and that's the extent of the media interest," she said. "I guess that's going to change now."
Posted by Recovox at 1:19 PM