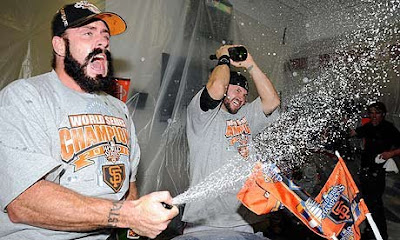 The city of San Francisco will hold a parade and civic celebration Wednesday for the 2010 World Champion San Francisco Giants after their return from Monday night's victory in Texas, reports CBS San Francisco.

The parade will follow the route taken by the Giants when the team first came to San Francisco from New York in 1958, the mayor’s office said.

It will end at the steps of City Hall, where Mayor Gavin Newsom will present the team with the key to the city and hold a civic celebration.

"San Francisco could not be prouder of its hometown Giants tonight," Newsom said in a statement. "Congratulations to every player on the roster and to the entire San Francisco Giants organization."

Warning: Giants slugger Aubrey Huff is considering a grand unveiling for his lucky red thong at the parade.

"I'm probably going to wear it all by itself in the parade," Huff said. "I better get a spray tan, huh?"

Newsom said the team had brought the entire city together throughout the season.

"San Francisco eagerly awaits your return," Newsom said to the Giants organization. "We cannot wait to celebrate your triumph in Texas."

The Giants beat the Texas Rangers 3-1 Monday night to win the World Series 4 games to 1.

The team is scheduled to return to San Francisco International Airport at 2:30 a.m. Tuesday, although no public or media events were scheduled with the arrival of the team’s charter.

The public is invited to line the sidewalks along the parade route or gather in Civic Center Plaza for the celebration. Attendees are advised to arrive early and take public transportation.

Thousands of people across the city celebrated the Giants’ victory in the streets tonight.

Crowds at Third and King streets near AT&T Park banged drums, screamed, drank champagne, and broke out into spontaneous chants of U-Ribe in honor of Juan Uribe.

People set off fireworks in the streets and held signs that said “It’s Destiny” and “Orange November.”

Elsewhere in the city, San Francisco Municipal Railway vehicles were stopped as fans climbed on top of the buses.

Most members of the crowd were in their 20s, but people of all ages were sprinkled throughout.
Posted by Recovox at 10:08 AM