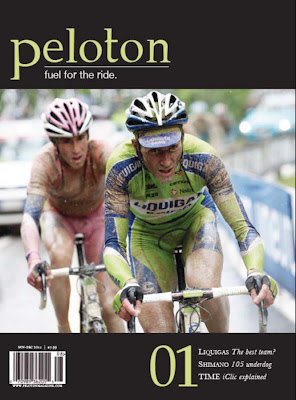 A cadre of bicycle and publishing industry veterans has launched Move Press, a media company that promises to recast content delivery and advertising opportunities in the cycling media arena.

The first media property to come from Move Press will be peloton whose website will launch on September 21 and will be followed by a bi-monthly print edition on newsstands November 8th. With an editorial slant that falls directly between generalist titles like Bicycling Magazine and race-focused outlets like Pro Cycling, peloton will provide performance road riders with a fuel for the ride.

Everyone involved with Move Press and peloton has worked at other cycling media companies and we all craved the opportunity to do things in a different and more innovative and more inclusive way says Move Press founder and Editorial Director, Brad Roe. We all believe it's the right time to develop media properties that will excite readers, respect advertisers and leverage the latest technical innovations to deliver content where and how it's being asked for.

In addition to Roe, Move Press has filled its ranks with a team of cycle publishing veterans including former Road Magazine Creative Director and Assistant Publisher, Tim Schamber, Testrider.com founder Ben Edwards, Cycle Sport Magazine's former advertising sales director Adam Reek and Paige Dunn, an editor, Ironman competitor and speaker who has been featured in a range of cycling and multi-sport titles.

Magazine industry experience on the consumer marketing and distribution side comes from Cuyler Gibbons and the Circ Monkey Team, veterans in niche publications and premiere fashion titles. Freelancers that promise to feature strongly in peloton include Patrick Brady of Red Kite Prayer fame, Chris Henry, Ben Atkins, Jered Gruber and longtime European race photographer, Yuzuru Sunada. Distribution for peloton and future Move Press brands will come from Time Warner. peloton's first issue will be sold in a range of America's best independent bicycle dealers and will be at premium newsstands starting November 8th and available in digital editions for iPad, or iPhone and internet on the same day.
Posted by Recovox at 12:59 PM

Want To Increase Your ClickBank Traffic And Commissions?