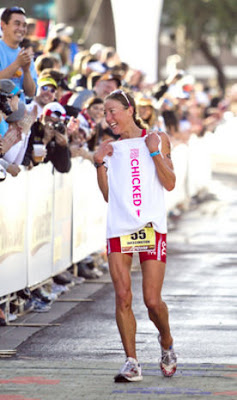 Proclaiming “this is my Kona” as she crossed the finish line in Tempe on Sunday, Chrissie Wellington gained satisfaction and two records from winning the seventh Ford Ironman Arizona.

The British triathlon star, prevented by illness from trying for a fourth consecutive Ironman World title six weeks earlier in Hawaii, broke the world record for an official Ironman course by more than 11 minutes in 8 hours, 36 minutes, 13 seconds.Sandra Wallenhorst previously held the official record with 8:47:26 at the 2008 Ironman Austria.

The 33-year-old was eighth overall, meaning she “chicked,” as it’s known in the sport, all but seven men. One who managed to beat her was her boyfriend Tom Lowe, finishing third in his full Ironman debut.

“I’m more than happy to do the washing up and the cooking for the next year because he beat me,” Wellington said. “There’s nothing I like more than to share this moment with my boyfriend. For me, he’s won the race today.”

Timo Bracht of Germany actually was the overall champion, winning his fifth Ironman in a course record 8:07:16. Defending champion Jordan Rapp, racing an Ironman for the first time since a nearly fatal bike collision in March, was fourth.

Close to 2,500 started the race with some expected on the course until the midnight cut-off. The water temperature in Tempe Town Lake was 61 degrees, and it wasn’t easy to warm up after the swim on a cool, windy day with occasional rain.

“The hail stones hurt,” said Wellington, who finished the final seven minutes of her bike on a flat tire and talked about auctioning off her bloody shoes after a run that included from early sub six-minute miles. “You really have to keep your wits about you on this course. You have to be aware and anticipate what the other athletes are doing.”

Bracht, sixth in Kona on Oct. 9, was 10th starting the bike, after the first transition, and first onto the run, after the second transition, 26 seconds ahead of Rapp.

Lowe climbed three spots coming off the bike to second in the run before dropping back to third behind Denmark’s Rasmus Henning, making up for a 23rd-place finish in Kona by taking second in 8:10:58.

“After Hawaii, I had a long flight back to my family then settled down to relax, drink a lot of beers, but only for two or three days,” Bracht said. “I had a good training concept with my coach, going not too hard. I wake up and thought, ‘Wow it’s 226K (total), it’s not only a long training day, it’s a hard race.’ But I always believe in me the whole day, and I did not struggle with the conditions.”

Jozsef Major, who lives in Scottsdale, was fifth in 8:26:15. Leanda Cave of Tucson was third among the women (9:13:50), completing an extraordinary six-week string of races that includes Kona (10th) and first- and second-place at half Ironmans in Miami and Clearwater, Fla.
Posted by Recovox at 10:10 AM