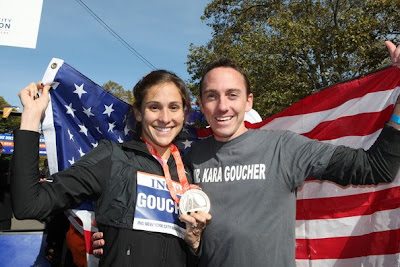 I ran my first marathon in New York two years ago. I can’t believe it has only been two years! So much has happened since then. I had a pretty good day, finishing third in 2:25:53. No matter how well or how poorly you do, you learn a lot in your first marathon. I learned some general things that I applied in the two marathons I ran after New York—Boston and the World Championships—and some specific things about New York that I will apply the next time I run New York.

One thing I did before Boston that I wish I had done before New York was some long, steady runs on hillier parts of the course. New York is a tough course, and it would have been nice to be a little more prepared for its challenges.

When I scouted the New York City Marathon in 2007, Paula Radcliffe, who won it that year, told me how difficult it is to get into a rhythm there. I didn’t know exactly what Paula meant at the time, but I found out! The course has lots of sharp turns, hills and changes in terrain and environment that keep runners on their toes. Ironically, I did my hardest 19-mile training run with my husband, Adam, on the Nike campus in Beaverton, Oregon. He kept making all these sharp turns through the parking lot, which annoyed me at the time, but it turned out the be great practice for New York.

I was fortunate that my coach, Alberto Salazar, was a past winner of the New York City Marathon, so he was able to give me lots of good tips. He told me to wear two layers of sweat clothes on the morning of the race, because the start area on the Verrazano Narrows Bridge is exposed and cold. He even bought me a comforter to wrap around myself before I warmed up. That was a godsend. Some of the unprepared runners out there were turning blue before the race got underway.

As an elite runner my race strategy was just to tuck in with the lead women and hold on as long as I could. There’s no sense in running off the front early in New York, because, again, it’s a tough course and you want to be sure you have something left at the end, when you really need it. Besides, it tends to be a breezy race, so if I were racing this year I would do the same thing I did in 2008 and let other runners break the wind.

Another thing Alberto told me before the race was to expect to be hit by a huge wall of crowd noise when I came off the Queensboro Bridge into Manhattan. He warned me that runners sometimes get too caught up in the excitement and surge like crazy there, only to die later, because there are still 10 miles left to run at that point. As it happened, I started to feel lousy on the bridge and the roaring crowd gave me a boost that carried me another three miles until I hit another rough patch.

In the last three miles I was hurting like I’d never hurt before in a race. I wanted to quit so badly, and if there hadn’t been so many people watching I probably would have quit—to my eternal shame. The fact that I not only finished but even managed to hold on to third place taught me the most important lesson I learned from my first marathon: you can handle more pain than you think, and if you just keep moving at all costs, you will make it.

The winner that year was Paula Radcliffe, again. Because she was the best marathoner in the world, I keyed off her throughout the race, figuring if I was with her I couldn’t be doing too badly. If I were running New York this year I would key off Shalane Flanagan and Kim Smith, who have both been running extremely well lately. I’d also have my eye on Mary Keitany, who might be the most talented athlete in this year’s field. But she’s also making her marathon debut, so I wouldn’t follow her blindly. There’s always a chance she won’t “respect the distance” and will start too fast and blow up.

In my ideal scenario I would stay with whoever was leading until we hit Central Park, then make my move, as Meb Keflezighi did in winning last year. Unfortunately, having just had a baby, I have to sit out the New York City Marathon this time. And with the Olympic Trials Marathon taking place in January 2011, I won’t be able to run New York next year either. But look for me to put all the lessons I learned from my first New York City Marathon into practice in 2012, after the Olympics!
Posted by Recovox at 5:09 PM