Riis says Schlecks lied to him about leaving 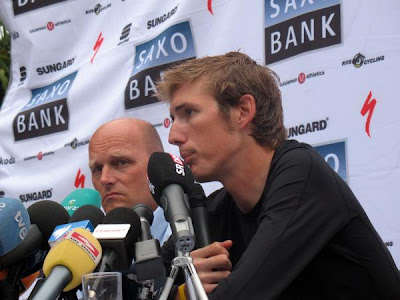 Andy and Fränk Schleck “lied” to Bjarne Riis earlier this year about their intentions of leaving his squad, the Team Saxo Bank owner has said. Questions have also been raised about how long Fabian Cancellara had been planning to change teams.

Interviewed on the Danish sport TV program Lige På og Sport (LPS), Riis said that he heard rumours in the spring of this year that the Schleck brothers would leave for a new team. He asked them directly if it was true, but said they denied it.

“It is disappointing. I can't do anything about them talking to others, they are allowed to do that. I have confirmed that they lied to me. I think that is unfortunate,” Riis said.

The broadcast claims that the Schlecks were already in talks with the new Luxembourg team at the time, despite their denials to Riis.

“Of course I had my doubts, but it was all so new. I feel like I have to rely on my people because, after all, that is what the team is built on. We need to trust each other, it's part of our values.”

This week, World time trial champion Fabian Cancellara indicated that the signing of Alberto Contador was the final impetus for him to leave Saxo Bank a year ahead of the end of his contract. However, LPS claims that he was already in touch with the new Luxembourg team as early as December 2009.

Last winter, former Astana manager Marc Biver was in charge of the project, and has confirmed that he was negotiating with Cancellara at the time. “Cancellara knew it,” Biver said according to the program.

“I know Cancellara and I personally had a talk with him about it. It was in December and January,” he said.

The Swiss rider's photo is even said to have been used in promotional materials.

Riis was not happy to lose Cancellara, particularly this way. “It's just a disappointment. It is not worthy of a world champion,” he said. “It is sad that the many good years we had ended this way.”
Posted by Recovox at 11:56 AM