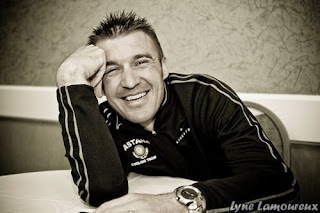 A new report gives a dramatic account of the actions of United States of America agents serving a subpoena to RadioShack rider Yaroslav Popovych in Austin, Texas last month. Jonathan Littman, writing for The Huffington Post based the account on two unnamed sources who detailed the incident.

Popovych became the latest person to testify before a federal grand jury in Los Angeles yesterday, where he denied witnessing any doping while a teammate of Lance Armstrong, but how he came to be there is a tale out of an action film's script.

According to the article, Popovych was signing autographs at Mellow Johnny's, the Armstrong-owned bike shop in Austin, Texas, and was heading to a car to leave when he was approached by an unidentified man.

"Popovych had already gotten in the car, when a man in professional attire, talking on a cell phone, grabbed the door before he could shut it," the account read.

Not sure who the man was, Popovych suggested the man talk to him at the hotel, and got back in the car to leave. The man dashed to his own SUV and proceeded to tail the car to the hotel, and in front of the Hyatt Regency a man dressed all in black stood in the middle of the street directing Popovych's car to stop.

When the driver started to go around the man, two more SUV's appeared, one blocking the car's front and one in the back, and woman with a badge motioned to the car to pull over.

They ordered Popovych out of the car, where the man who had originally approached him served the subpoena to appear in Los Angeles on November 3, and threatened him with arrest if he tried to leave the country.

Popovych's lawyer Ken Miller said the incident "struck him as a little peculiar". Miller told the Los Angeles Times: "It was effected on a guy at a charity ride who was going to leave Texas for a vacation with his girlfriend. A guy from Ukraine who doesn't speak great English and didn't really understand what was going on."
Posted by Recovox at 11:30 AM