He learned to welcome adversity 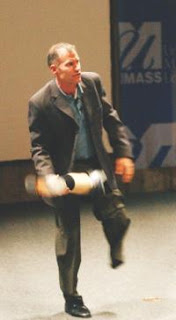 Paul Martin had already overcome the adversity of growing up in a tough home environment and being adopted into a foster family.

But after earning a degree in mechanical engineering from UMass Lowell in 1992, he was excited to begin working for a major company in Ohio, only to overcome his greatest challenge six months later, when he lost his leg below the knee in a serious car accident.

Yesterday, Martin returned to campus as part of the school's Alumni Showcase Speaker Series. He told his story of how he used an optimistic spirit to overcome his adversity and become a world-class professional athlete.

new potential and achieve unimaginable success as an athlete competing in numerous triathlons and marathons, as well as cycling, hockey, skiing and many other sports since the amputation.

“I'm fully convinced that if something bad happens, something good will happen — it's the balance,” said Martin. But he said his life shows that it is necessary for the individual facing adversity to learn from it and seize it as an opportunity.

“Adversity is going to come to your door,” he said. “You can resist it or welcome it in. We are immeasurably benefited by accepting our adversity.”

Immediately after the amputation, he found himself surprisingly happy and eager to return to work
Advertisement and move on with his new life. His only second thought about the accident was to ask, “Why was I so stupid to have done this to myself? But I had no self-pity.

“Happiness was clearly not embedded in my left foot,” he joked.

After moving to New Jersey for a new job, Martin began running in Central Park. He received positive responses from other runners who marveled at his strength and spirit, seemingly having their own spirits lifted by the sight of him running with only one leg. He ran the New York City Marathon, finishing behind 16,000 runners — but beating 9,000. He said he broke into tears when he finished that first marathon in Central Park.

Martin quit his job to pursue competing in the Paralympics, which he has done in Australia and Greece, winning medals in cycling. He also won the 2002 World Championship for disabled cycling. He may have become best known for his competitive success in the Ironman Triathlon in Hawaii, finishing it 10 times. He peaked in 2005 when he finished 89th in the field of 2,000 predominantly able-bodied athletes, establishing a record for an amputee.

Martin demonstrated how he would remove and raise his prosthetic leg in triumph after finishing a competition, which became a trademark image for him. The audience of mostly students, as Martin had been at UMass Lowell 20 years before, seemed receptive to his engaging personality and life story. Even the undefeated women's field hockey team attended, seeking inspiration before they move on in the NCAA tournament.

Martin said he has also surprised himself by authoring two well-received books based on his life story. They are One Man's Leg and the newly published Drinking from My Leg: Lessons from a Blistered Optimist.

He said he is very happy now in his life as the primary parent at home raising three young sons while his wife continues her busy career as a doctor.
Posted by Recovox at 8:58 AM