World Champs Prove Their Worth in Frankfurt 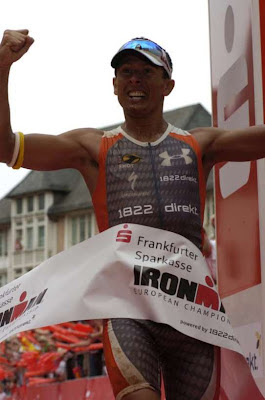 In case you thought Brit Chrissie Wellington's Ironman world title last year was a fluke - it wasn't. At Sunday's Ironman European Championship in Frankfurt, Germany, Wellington dusted the field with a 8:51:24 - only 31 seconds off of Paula Newby-Fraser's fastest all-time Ironman mark. Wellington was the first women to emerge from the swim and never relinquished the lead. In the end, she topped runner-up Nicole Leder of Germany by 26 minutes. Wellington's final splits were 48:34 (swim), 4:57:17 (bike), 3:01:44 (run).

While there were no near world best times in the men's race, there was plenty of excitement and some very fast times. Spain's Eneko Llanos had a 38-second lead on Ironman world champ Chris McCormack after the swim, but after only 4:26 on the bike, both were back in T2 and ready to do battle on the marathon. The surprise of the day came from 25-year-old German Andreas Bocherer, who actually made it to T2 a few seconds ahead of Llanos and Macca. Bocherer went on to finish seventh.

As many expected, the race came down to a 26.2-mile battle between Llanos and McCormack and the eight-hour mark was well within reach of both athletes. In the end, Macca had just a bit more gas in the tank than the Spaniard and finished with a 54-second gap in 7:59:55. While Macca's 2:45:46 was impressive, the fastest run of the day was turned in by Timo Bracht (2:42:33), who ran his way to third.