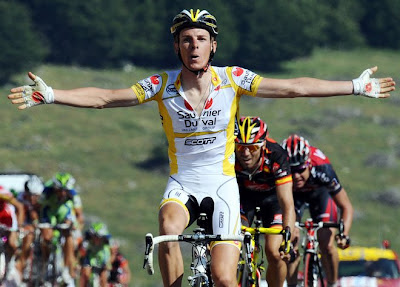 Italian Riccardo Riccò took his first Tour de France stage victory atop the climb at Super Besse, besting Alejandro Valverde and Cadel Evans in the uphill sprint. The finish was overshadowed by a crash from yellow jersey wearer Stefan Schumacher, who was in the lead group in the final kilometre, but touched wheels and crashed. The judges do not apply the same time rule for crash victims on hilltop finishes, so the German lost his overall lead to Kim Kirchen (Columbia) who finished fifth.

Riccò was happy to have beaten the Tour favourites to win the stage. "Today was a great win. I beat a great champion," he said, but brushed off comparisons with his self-proclaimed idol Marco Pantani. "Pantani is unique. He won the Tour and the Giro. I have not, but I hope to get better over time." He also discounted ambitions for the podium in Paris. "I just want to gain experience," he said, and tipped the man he beat today to win in Paris. "I think Valverde can win the Tour."

With his tenacious ride, Cadel Evans moved into second overall, just six seconds behind Kirchen, and ten seconds ahead of the unfortunate Schumacher. Kirchen took over the lead in the points classification from Thor Hushovd, but the Norwegian will still ride in green as Kirchen will be in yellow.

The day's breakaway belonged again to three Frenchmen. This time it was Sylvain Chavanel (Cofidis), Freddy Bichot (Agritubel) and Benoît Vaugrenard (Française des Jeux). Chavanel took over the lead in the mountains classification, where he is tied on points with Thomas Voeckler.
Posted by Recovox at 9:20 AM