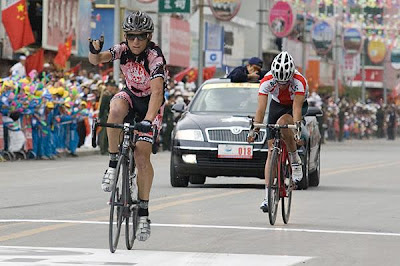 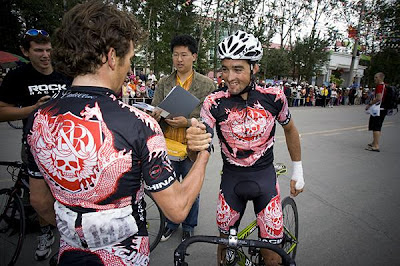 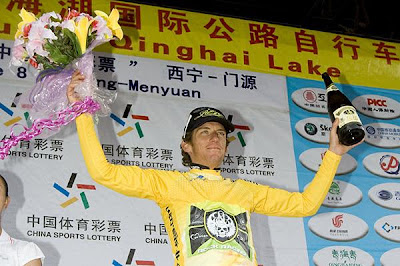 Rock Racing’s Tyler Hamilton took his first win since returning to competition in 2007 in a thrilling finale, after the two leaders were caught on the Haute category climb’s descent. Hamilton escaped with Stage 6 winner Marek Rutkiewicz (Poland) on the descent, with the pair holding a one minute advantage over the last 20 kilometres to the line.

"Oscar [Sevilla] came back and the Polish rider [Rutkiewicz] was just five seconds in front, so I jumped across," Hamilton explained. "He is a mean descender, really fast. I had a hard time just holding his wheel when he was in the tuck. A great guy to be away with, he was riding at 100 percent.

"I let him take a little longer pulls," he added. "I think that he was faster than me in the sprint, but I let him work a little bit harder."

The win catapulted Hamilton into the overall lead and Rutkiewicz into second. Hamilton held fourth just 15 seconds down heading into the stage, while Rutkiewicz was in fifth a further six seconds behind. Hamilton now leads Rutkiewicz by 10 seconds, courtesy of the time bonus at the finish, with Hossein Askari (Tabriz Petrochemical Team) now 1’08" down in third.

The duo’s attack caught overnight leader Askari by surprise. With just one other rider in the leading group, the Iranian was unable to close the gap.

"This is not such a good feeling," Askari said. "To have two riders go away in the downhill to win was not good."

Askari now sits in third overall, but with just one more mountain stage remaining and Hamilton’s form improving as the race goes by, it will be a tough ask for him to try to take the jersey back. "It will be a little difficult for us tomorrow," he admitted. "Rock racing are very strong and I think that he will take the jersey all the way to the line.

"Now we will ride for the mountains jersey," he said.

After the last two mountain stages came back together on the descent, Hamilton gambled that the same thing would happen today. "I didn't have the acceleration to go with the Iranians," he said. "They have proven that they are the strongest climbers in the race. So I just rode my own tempo.

"I stayed with the main bunch and Dave McCann - he is really strong, I take my hat off to him," he added. "Tomorrow will be hard, one day at a time. I am really happy."

Rutkiewicz was pleased with second on the day and in the overall, admitting that it was an unexpected result. "I was second today, but that’s okay," he said. "I am very happy, that I’m second on the general classification. Before the stage I didn't think that I would be able to be in second after the stage.

"I was two minutes in front of the peloton [at the start of the main climb of the day], I attacked before the climb," he added. "It was good because it gave me some leeway. It was a very good situation for me."

"We were going for the general classification and were really going for it," explained Rutkiewicz. "I had my team manager screaming in my ear to go."
Posted by Recovox at 9:03 AM