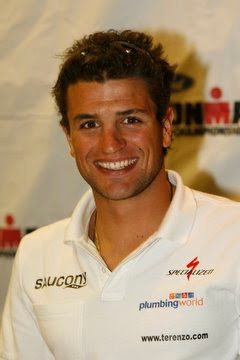 What a beautiful day for racing in the wine country of Northern California. When the professional athletes took off on the swim at the 2008 Vineman Ironman 70.3, it was a cool 53 degrees with a light misting of fog and no wind. The water temperature measured 72 degrees, making it a wetsuit legal swim for all competitors.

Matt Clark led the charge out of the water right around 22 minutes. In hot pursuit as they grabbed their bikes were TJ Tollakson, Craig Alexander, Terenzo Bozzone, Paul Ambrose, the Lieto brothers and Paul Amey. Chris Legh was about 30 seconds back. Accompanying this who’s-who clan was the amazing Joanna Zeiger.

About half way through the bike, Paul Ambrose was leading the way, with Chris Legh, Matt Lieto and Steve Larsen close behind. Larson had to make up a 2 minute 30 second deficit from the swim to work his way up to this elite group of men. I am sure everyone was concerned about his presence knowing his superior cycling ability.

When the men approached T2, Larsen rolled in with a three-minute cushion over Paul Ambrose and Matt Lieto. Bozzone, Amey, Burkel and Craig Alexander had lost five minutes to the lead.

By the time the men hit the half-way point on the run, though, Bozzone had erased the five minute deficit and was running in the lead with Craig Alexander in second, 10 seconds behind and Larsen in third trailing by just over 30 seconds.
Bozzone held on for the win, setting a new course record in the process. “I decided to ride my own race today. So when I got caught by a bunch of guys at mile five I just stayed with my plan. I love this course and look forward to coming back again next year.” 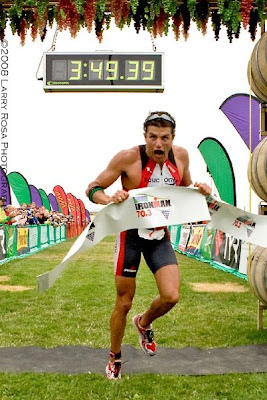 In the women’s race, Joanna Zeiger was settling into the bike ride while Sam McGlone, and Kate Major were just finishing the swim, trailing by several minutes. Zeiger continued to show her determination and was riding solo at the midway check point of ride with McGlone, Alexis Smith and Major trailing by over four minutes.

Ultimately though, the race belonged to Zeiger. Even as they passed the spotters at the 10 km point of the run, Tyler Stewart had worked her way into second, but she was still 3:15 in arrears. McGlone, Major and Smith were doing their best to catch Zeiger but the gap of more than five minutes was just too much. Zeiger dug deep and did not panic even when the hard-charging Tyler Stewart whittled the 3:15 gap down to 40 seconds on the return portion of the run.

“My plan was to go hard on the swim, go hard on the bike and go hard on the run” laughed Zieger in her post race interview. “The plan went well until mile seven when I started to have GI upset. I really thought my race was over. Overall, I am really pleased with the day.”