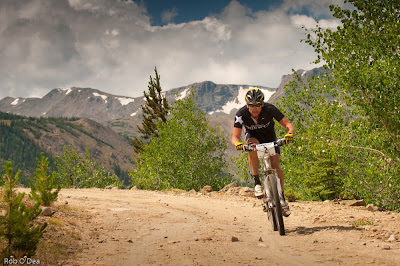 Historically, winning the lottery to get into the popular Leadville 100 mountain bike race has been almost as tough as the race itself. However, a new qualifier system under development will provide additional race entry opportunities for the legendary 100-miler, which will be run next on August 13, 2011.

AEG, the owner and operator of the Amgen Tour of California, will partner with Life Time Fitness, Inc., which owns the Leadville 100. The two companies are collaborating to grow and develop what may be the highest profile mountain bike race in North America. The race annually attracts top road and mountain bike racers including riders like Lance Armstrong, Levi Leipheimer, Jeremy Horgan-Kobelski, Rebecca Rusch and Amanda Carey.

AEG will create a national series of qualifying races, each of which will provide athletes with guaranteed entry into the perennially sold-out Leadville Trail 100 mountain bike race. The series of races will provide avid cyclists with opportunities outside of the traditional Leadville Trail 100 Mountain Bike Race lottery system to gain entry into the event. In 2011, the Leadville Qualifying Series will consist of three races and will expand to eight races by 2013.

"It struck me that the lottery system has some limitations," Andrew Messick, President of AEG, told Cyclingnews. "A lot of people who are serious cyclists want to do this race sometime in their lives but don't always get the chance. There is so much luck involved in getting in. We thought it'd be more fair to create this system."

Messick's interest was piqued after his own involvement with the race. "I did the Leadville Trail 100 in 2010. I came away from my Leadville experience believing that it's such a fantastic event. It's a well known event within the mountain bike community, it's an exceptional event, and there is an opportunity for a much broader environment for the event.

The three 2011 qualifying events will be held in June and July in California, Colorado and the Northeast. In 2012 and 2013 additional races will be added in Texas, the Southwest, Midwest, Southeast, and one more in California.

Each qualifying event will provide 100 race entries into the Leadville Trail 100 MTB Race with half of the entries awarded to athletes based on age-group and elite-field performance and the other half selected from the pool of finishers who beat a qualifying time standard.

Messick, who is signed up for the Leadville lottery for the 2011 edition of the race, said, "This series will provide an opportunity for others who haven't ridden their mountain bikes in a while or want to do something different than road riding which still involves riding their bikes. Leadville qualifying races should be super hard but not super technical, but they will still be a challenge."

Qualifying events will be targeted at 100km each. "We don't think they should be 100 miles. That's a little long for earlier in the season, and we want the qualifying events to fit in the season as well as be a meaningful challenge for racers. A 100km race with lots of climbing is a solid day in the saddle for anyone. It also fits in with a training program for Leadville. We'll be looking for fireroad-focused courses."

Specific qualifier events are still to be determined. They may or may be tied to established events. "We don't have an expressed point of view on that yet," said Messick. "Certainly there are advantages to either - to creating your own - you can do it how you want. By partnering with an existing race, we'd get the organization already built in although integrating sponsorship can be tough."

The Leadville Trail 100 MTB Race started in 1983. It is 103 miles and features 12,620 feet of climbing on single and doubletrack trails. The race is notoriously difficult in that it is run at more than 12,500 feet. Levi Leipheimer and Rebecca Rusch won the 2010 edition of the race.
Posted by Recovox at 10:10 AM