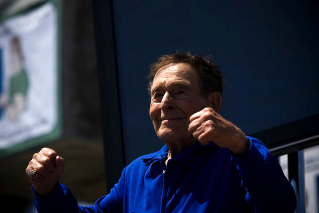 Jack’s TV show was one of my first exposures to the world of fitness, or, as he put it, physical culture. Growing up in New England, I had spent my days exploring the adjacent backwoods, climbing trees, skinning knees, and getting into trouble, but I wasn’t “working out.” I had no concept of it. I was just doing what felt right and what was fun, and most kids did the same. Jack LaLanne introduced us to the formal concept of physical fitness. He was one of the first to realize that the childhood impulse toward physicality and movement needed to be nurtured and developed in adulthood. I still remember sitting in a chair in front of the TV doing knees-to-chests, just like Jack.

Still, something wasn’t quite right, I thought. Here Jack would be doing relatively light exercises on camera – jumping jacks, jogging in place, various full body movements without weights – but he was completely ripped. I mean, he was huge, especially for the time. Big chest, lats like wings that rivaled Bruce Lee’s, a thin waist, biceps like softballs. The guy obviously didn’t get that body doing the workouts he was showing us. He was keeping the good stuff secret. There had to be an entire other world of exercise lurking out there, and I knew it was a whole lot more intense than what he was doing. And I wanted to know.

So I started looking. Thus began my serious pursuit of physical fitness. Jack LaLanne had it, and I wanted it. Our methods differed, of course. I gravitated toward long distance running, mostly because I was a skinny kid with a propensity for endurance, but I became convinced that pursuing excellence in physical fitness was worth doing because of Jack. I mean, fitness as a concept wasn’t even on my radar before him. It was just something you did as a kid because it was fun, and your mom and dad didn’t do because it’s just kid’s stuff.

Jack changed all that. Yeah, LaLanne wasn’t Primal, but we had more in common than you might suspect:

He famously said “If man made it, hate it.” Jack only ate real, whole food and never touched refined sugar. He shunned red meat late in life and ate egg whites, lean meats (mostly fish) and whole grains, but his emphasis on real food is notable.

He worked out every morning in a fasted state before breakfast and ate just twice a day.

He wore ballet flats that might as well have been barefoot shoes.

Before we had easy access to reams of medical journals featuring research on the link between physical activity and brain function, Jack intuitively knew exercise was about mental fitness and psychological well-being as much as it was about physical fitness. A constant refrain of his was that people were unhappy, unfit, and messed up because we had forgotten how to move and live naturally.

He bucked Conventional Wisdom. All the experts insisted that weight training made athletes slow and bulky, turned women into man-beasts, and was bad for older people, heart disease patients, and the libido. We know this to be nonsense, but it was “truth” sixty years ago. And it might still be if Jack hadn’t opened up the nation’s first gym in 1936, popularized strength training, and got a nation of women interested in fitness.

He fed his dog, Happy, raw ground beef and liver every day.

He valued quality over quantity. “I really don’t give a damn how long I live, but I want to live while I’m living.”

Besides all the overlaps with Primal living and not even taking into account his famous feats of strength (beating Arnold in a chinup and pushup contest at Muscle Beach, towing a fleet of 70 ships across the Long Beach Harbor at age 70) , Jack LaLanne was just an awesome dude.

He had a penchant for sexual innuendo. Check out his seemingly throwaway comment on the famous fingertip pushup video, and note his preceding form: “Get your husband to try it tonight, but not you.” And then there’s his extremely explicit Playboy interview from 1984.

He influenced my disdain for the overly complicated and drawn-out warmup: “Fifteen minutes to warm up! Does a lion warm up when he’s hungry? ‘Uh-oh, here comes an antelope. Better warm up.’ No! He just goes out and eats the sucker.”

Only he could pull off those skintight sleeveless jump suits (paired with those amazing ballet slippers, of course). Actually, this is probably, literally true; LaLanne had to get his jumpsuits tailor made because his body proportions were so exaggerated.

The man was a force to be reckoned with. He was an admitted zealot, a self-described health and fitness nut who, when asked how long he’d live, replied, “The earth will go first.” I will say that he seemed to have a poor opinion of human nature. He seemed to buy into the notion that we are savage beasts, constantly struggling against our animal natures, whether it was lust for drugs or junk food or booze or meat – and copious amounts of training and ironclad discipline and willpower were his buffers against that side of himself. I think for someone who can pull it off and keep it up, the draconian self-regulation works, but I think it can be harmful for a lot of people, especially when they fail or slip up. And that’s his other legacy, one that I shy away from, personally.

In the end, though, all of us involved in physical culture, diet, and health – we’re all fighting for the same goal. Our methods may differ slightly or massively, we may be vegans or full-blown carnivores, but we can all find common ground. Jack LaLanne wouldn’t have agreed with a lot of what I have to say, and I bet he would have agreed that my cookbook was one of the year’s unhealthiest, but we were both trying to make people healthier, happier, and stronger.

Well, Jack, you’re gone and the earth remains, but it’s just not the same. Here’s to you. I’ll toss an egg yolk in your honor.
Posted by Recovox at 2:07 PM