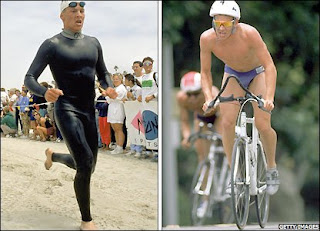 The most famous triathlete in the world has not competed in almost 20 years. Not in a triathlon, anyway.

Lance Armstrong, the once and (perhaps) future multisport man-child last put his inimitably-strong stamp on a swim/bike/run event in the early 1990s. And if you follow his tweeting alter ego, @JuanPelota, the all grown up Texan is training for a return to the sport from which he sprang.

The online banter is all abuzz about Lance back in the pool. Lance running as well as he did in 2007 when he ran 2:46: 43 in the NYC Marathon. The kid with the cartoon superhero name is rumored to be considering Kona. Suddenly, triathlon was a TMZ connection. A real celeb in our midst. But what are the deeper threads and meanings and motives for Junior to rejoin the tri tribe?

Scenario #1: Juan Pelota’s playful Twitter posts are, in fact, a realistic vision of Armstrong. His competitive cycling career past, the kid from Plano is having fun again; remembering his roots, keeping very fit. He may or may not compete, but winning ain’t the goal for Lance. Lest we forget, he has nothing to prove to the world of endurance sports. Or does Armstrong think otherwise?

Scenario #2: Every athlete who competes at world-class levels leaves their arena with a desire to return—gladiators living to fight again. Armstrong has made two successful comebacks before; one from his own mortality, the other from the tyranny of fame. Perhaps a return to triathlon would signal something even greater—a completion of some circle, some loop of physical culture that saw a kid from Plano High rise to superstar status, fall to the indiscriminate ravages of cancer, return as king, and now faces the abyss of “didn’t-you-used-to-be isms.”

Scenario #3: It’s not all about the bike. As Armstrong has stated clearly in his comeback #2, he wants to race to bring awareness to cancer research. And through his foundation, LAF, he has succeeded beyond anyone’s imagination. LAF now ranks among the top 10 cancer research fund raising organizations in the USA with at least $325 million alone derived from those wonderfully goofy yellow wristbands. Forget the seven Tour de France victories, the allegations of performance enhancing drug use, even the dates with Sheryl and Kate. For the 13 million individuals who are diagnosed with cancer every year, finding a cure is what matters. And if Armstrong can help that cause by swimming 20 X 100 yards on the 1:20 or sneaking in a brisk 6-mile run, nothing else really matters.

Scenario #4: Lance Armstrong will win the Ironman World Championship in Kona. Maybe he believes this to be true. And if his success rate in other, perhaps more daunting life challenges gives this notion plausibility, he can win. This is where the banter among endurance pundits gets curiouser and curiouser. Lance’s past is analyzed, his present observed, and his future brought into the popular culture of What-ifs. Everyone has a take on how Armstrong would fare if he tossed his lot into Kailua Bay. We extend the discourse by asking what his presence would do for the event. For the sport? For cancer research? For his own legacy? Jesus, what if he actually won the damn thing? Then what? A tryout with the Texas Rangers?

Scenario #5: Lance doesn’t need to return to triathlon and he doesn’t need Kona. Certainly the man can stay plenty busy raising his five kids, working for his Foundation, and training as the spirit moves him. Sure there are the ongoing allegations of PED use and perhaps those will diffuse over time or finally come to head if charges are brought against him. It’s a sad scenario. For nothing good can come of indicting Armstrong. Nothing. He lived in a culture that was rife with substance use. Cultural relativism suggests that a top professional cyclist who did not use medical supplements in his era would be considered as deviant; a person deviating from the acceptable norm. To single out an icon suggests more about those working tirelessly to find needled evidence among the hay of past accusations than it does about the nature of 1990s cycling. We know the sport wasn’t “clean.” And we know the culture of pro cycling is making greater efforts to rid itself of PEDs than most other professional sports.

Armstrong must know this as well, and whether his participation in triathlon has any bearing on the public’s thoughts about those allegations remains to be seen. It shouldn’t matter. And perhaps it won’t. Until there is immutable proof of his use of PEDs, we must assume he was clean. Regardless of your own inclinations, most humanistic legal systems are based on assumption of innocence rather than guilt. Try a few months in Myanmar or Somalia if you want to see how it works when you try it the other way around.

So, no different than Armstrong, we are left where we began—watching a very talented man-child playing at sport, wondering about his potential. Everything else that happened in the past might matter, but not really. To spin the Marx/Engels claim, “all that is solid melts into air.” And we follow @JuanPelota and his spanglish training reports, wondering as we have so many times before, can he really do this?

Lance Armstrong, like other grand figures of history, has given us grand narratives. Through his words and actions, he has inspired millions to rethink their own orientation to a physical world that doesn’t always play fair. Through his calculated success, we learned to marshal our own forces when under attack. The myth of Armstrong has never played the insouciant strings of c'est la vie. More so, it is the get-er-done grit of the Great West.

Now, however, there appears a paradigmatic shift in Lance’s new/old sport choices. If we are to believe the rumors, Armstrong wants to win, but he wants to have some fun, to open new doors of athletic perception. And that, I will argue until the cows come home, is what triathlon is all about. The sport was not founded on technology or training regimes but on doing something new, unique; tough but fun. Something not everyone could do.

But you could sure as hell try.

That’s my wish for an old friend from the great state of Texas. Do it for the right reasons and everything else will come. Hasn’t it always been that way, Junior?

Scott Tinley won the Ironman World Championship twice (1982, 1985) and the Ironman World Series three times. He was inducted into both the Triathlon and Ironman Hall of Fame upon retirement in 1999.
Posted by Recovox at 1:34 PM