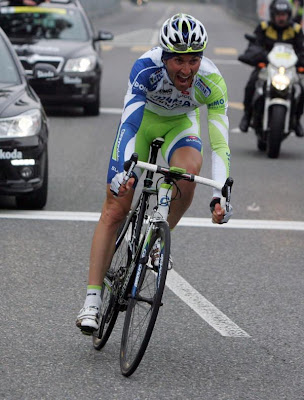 While Ivan Basso’s (Liquigas-Cannondale) season will be judged largely on his performance at the Tour de France, the Italian has started his campaign on a positive note. After a strong showing at the Trofeo Laigueglia last week, Basso took victory at Sunday’s GP di Lugano, the first time in a decade that he has won in February.

“[The last time] was 14 February 2001,” Basso told Gazzetta dello Sport. “I won a stage of the Tour Méditerranéen on Mont Faron.”

Basso was a young professional with Giancarlo Ferretti’s Fasso Bortolo outfit at the time, and a lot of water has passed under the bridge in the intervening ten years. While he counts two Giri d’Italia on his palmares, Basso also served a suspension in 2007 and 2008 for what he termed as “attempted doping,” when his links with Dr. Eufemiano Fuentes' blood doping programme were uncovered during Operacion Puerto.

The Italian is adamant, however, that his victory in last year’s Giro marked a turning point in his career and he indirectly credits it for his strong opening to this season. He also admitted that after a quiet start twelve months ago, he was keen to be competitive from the off in 2011.

“Winning the Giro in 2010 was fundamental in giving me back awareness,” he explained. “And then the birth of my third child was the icing on the cake.

“I just wanted to be sharper in the spring because I didn’t like how I was going this time last year. I’m not saying that a champion should always be able to win, but he should always be convincing. I need to be in the thick of the racing, a protagonist.”

Indeed, the entire Liquigas-Cannondale team have collectively been among the most impressive performers of the season so far. Peter Sagan was indomitable at the Giro di Sardegna, where Vincenzo Nibali and Daniel Oss were also prominent at the head of the peloton. Basso puts their good form down to a recent two-week training camp in Tenerife.

“The two weeks at Teide were very important,” Basso said. “All of Liquigas is in great form.”

Next up on Basso’s agenda are Tirreno-Adriatico, the Volta a Catalunya and the Tour of the Basque Country. He has earmarked Catalunya’s summit finish at Andorra as one of the most important test sites of his spring preparation, as it offers him a chance to measure himself against Alberto Contador (Saxo Bank) in what he calls their “first, true and anticipated duel.”

Contador recently returned to competitive action without sanction in spite of testing positive for Clenbuterol at the Tour de France. The Spaniard’s comeback has been hugely contentious and prompted widespread questioning of the Spanish Federation’s disciplinary procedures, but Basso has nonetheless declared himself pleased that Contador is back in the fold.

“I’m happy that Alberto will also be there, he’s a rider that I admire a lot,” Basso said. “At the 2010 Tour he gave me a KO in the first round. I’m ready to begin again. Certainly Contador is Contador, and when he attacks it hurts, but this time I won’t start beaten."
Posted by Recovox at 3:38 PM