Zabriskie zones in on Tour of California 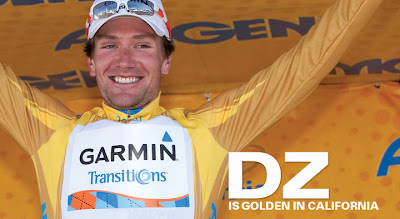 Dave Zabriskie (Garmin-Cervelo) will once again target victory in the Amgen Tour of California, while he has also pinpointed the Tour de France as a race he would like to perform in.

The American has finished on the podium in California three times – twice in the last two years – making the top ten in every one of his four finishes. Last year he narrowly missed out on victory to Michael Rogers.

“California is a good goal,” Zabriskie told us.

“It’s where I live and I’ve always really liked the race. I was very close last year but Rogers rode a good race. This year is going to be a pretty hard race, with a lot of hills and this Mt Baldy is supposed to be pretty challenging, but it’s something for me to target again.”

While Zabriskie will line up in California as one of the favourites, his billing for the Tour is far less obvious. While it’s still no certainty that he will make Garmin-Cervelo’s starting line-up, he has had mixed experiences with the race. In 2005 he won the prologue and wore the yellow jersey for several days. Since then he has failed to replicate that form, finishing in the top ten in just three stages.

However at this point last year his teammate, Christian Vande Velde, and team boss, Jonathan Vaughters, put Zabriskie’s name forward as a possible dark horse for the top ten. But an injury picked up in training meant that he was unable to show any of the form he had built up in California.

“I wanted to come over and do the Tour de Suisse last year and have a good transition into the Tour de France and do a lot better than I did. The problem was that I didn’t have that good transition. You put that many miles into the bike and training and you get sensitive to changes in millimetres and my seat slipped and it jacked my body up,” Zabriskie said.

“I was actually in tears one night at the Tour thinking I wasn’t going to finish. I felt like such a wimp because all the other guys had broken bones and they were continuing. My knee was so bad I was limping on the bike.

“All the physiotherapy staff were hitting me with therapies and they raised my saddle up and I was able to help Ryder Hesjedal for a few days and finish the Tour but I didn’t get what I wanted from it.”

It begs the question as to how far Zabriskie can go in a three-week race and whether he can replicate his previous form of week-long racing into a more sustained block of competition.

“I’d like to think that it's possible for me to do well there but it’s hard to pull off. Look at Rogers, he won California and then he dwindled in the Tour. Look at Janez Brajkovic, he came out of California flying and won the Dauphine but he didn’t really turn any heads at the Tour either. Form is never going to continue on an upward trajectory, it’s going to go up and up but you’re going to have a downer. All I know is that I’d like to go into July and smash that thing now.”

At 32 years of age Zabriskie believes he is in one of the best phases of his career and enjoying racing more than ever.

“If anything I like it a lot more than I used to. You learn so much more over the years. I’m a lot healthier now so if I could go back and be a neo and have a solid base and stability I’d really benefit. I just messed around in those early years, just trying to save money and storing stuff here and there, waste a week, a day, staying here and there and dealing with stress. Now I just get over and the apartment is set up. I know what do to and how to train. I have a much more positive outlook on racing.”

While Zabriskie may be enjoying his riding more than ever he still faces questions after former teammate and friend, Floyd Landis, included his name in a series of letters to USADA in 2010, in which he alleged doping practices during his time at US Postal.

The two were once friends, sharing an apartment in Europe.

“He’s retired now so I hope he can… I don’t know, it’s a touchy situation. I mean I hope he’s healthy and having a good life,” Zabriskie said.

“Back then I wasn’t making a lot of money so he let me move in with him but we were at separate races a lot of the time. It was more like a place to put your stuff. There would be times when we would be there together though. We were friends.”

Landis left US Postal for Phonak in 2005, while Zabriskie moved to Bjarne Riis' CSC team. However it was after Landis’ positive test for testosterone and subsequent fall from grace in 2006 when the pair started to drift.

“Our friendship started dwindling after he went positive and then the last contact I had with him was maybe in March last year.”

Zabriskie knew that Landis was planning on writing letters.

“He said that’s what he was about to do. Whatever. There’s nothing I can do. Who knows if he did the right thing, all I know is that it hasn’t been easy for him. Reading my name in those emails wasn't the most pleasant feeling.”
Posted by Recovox at 1:29 PM