LIVESTRONG Austin Marathon and Half Marathon 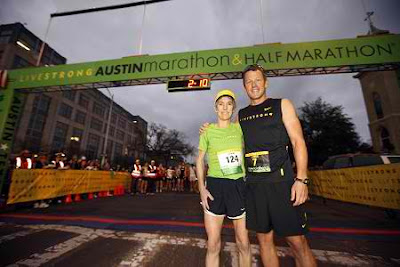 History was made Sunday, February 20th when 20,000 runners took to the streets of Austin for the first-ever LIVESTRONG Austin Marathon and Half Marathon. In its 20th year as Austin’s premier running event, more runners than ever toed the line, including over 200 cancer survivors and nearly 500 members of Team LIVESTRONG.

Our runners were treated to a very special Q&A at LIVESTRONG HQ the day before the race with Joan Benoit Samuelson (Olympic gold medal winning marathoner at the 1984 LA Olympics) and Founder and Chairman Lance Armstrong, both of whom ran the Half Marathon. They spoke movingly about the work the Foundation is doing and provided invaluable race tips for our runners.

Race day conditions were far from ideal with humid conditions and temperatures reaching the upper 70s, but this seemed only to spur on the runners. The course was flush with yellow and runners were cheered heartily at the Yellow Mellow (miles 9-10) and mile 18.

All told our Team LIVESTRONG runners have raised over $325,000 (up from 57 runners and $32,000 raised in 2010) to support our vision: to fundamentally change the way the world fights cancer. We are incredibly grateful for their efforts and dedication. It was beyond inspiring to see the sea of yellow among the throngs, battling hills, heat, and humidity for something so much bigger than 13.1 or 26.2: 28 million, the number of people living with cancer around the world.

Thank you to every runner, donor, participant, and supporter for helping to make our first year at the LIVESTRONG Austin Marathon and Half Marathon a memorable one. We are already excited for next year!
Posted by Recovox at 11:23 AM