DZ & Garmin-Cervelo warm up in Calpe 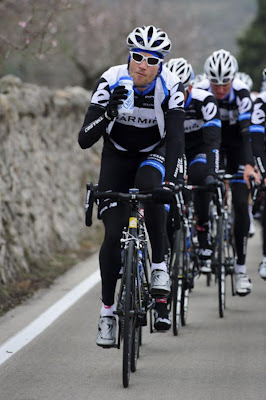 Back from the latest Garmin-Cervelo training camp in Calpe, Spain, Dave Zabriskie is excited about the season ahead.

The stage-race specialist met up with his teammates from January 9-19 for an intensive camp on the Spanish coast and while their December camp in the Cayman Islands was primarily focused on team-bonding, the European trip was all about fitness. So much so, that unlike most team camps, the media was not invited and the riders had only a single rest day.

“It was one of the best training camps I’ve had in a long time," DZ told us. "It was a real camp, in modern day cycling we don’t really train that much at them, we just try to get things swept out of the way before the year kicks off, which is convenient in one way but sometimes it’s just nice to concentrate on training. It was a real biking camp. We had one rest day and messed with our positions a little but it was bikes and more bikes.”

The Garmin-Cervelo team has gone through a number of changes over the winter, with riders including Heinrich Haussler and world champion Thor Hushovd joining. On paper the squad is one of the strongest in the world and its status as such is reinforced by the creation of a women’s team.
Posted by Recovox at 10:18 AM