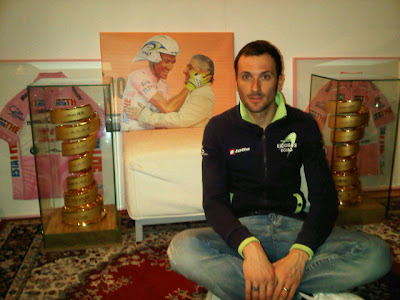 The jersey design for the 2011 Liquigas-Cannondale team was unveiled today at the team presentation in Milan, with team leaders Ivan Basso, winner of the 2006 and 2010 Giro d'Italia, and Vuelta a Espana winner Vincenzo Nibali sporting the white, green and blue design.

Basso may give up the chance to defend his Tour of Italy title in order to focus on his dream of gaining his first ever Tour de France victory, while Nibali will be the team's designated leader for the Giro d'Italia and Vuelta a Espana.

"If I participate [in the Giro], it will be to help Nibali," Basso said according to AFP. "I will calmly decide in the coming months. " Basso remembered his trainer, Aldo Sassi, who died Dec. 13 at age 51. "He told me to wear the yellow jersey," said Basso. "His death was a blow. He will be missed."

The team's manager Roberto Amadio said his aim is to have the Liquigas-Cannondale team as a main protagonist in every race. "We will be competitive, I have no doubt," Amadio said. "We will try to be an example of a team which achieves the best sporting results with sacrifice and hard work. What matters to us, first of all, is the way in which you achieve the victories."
Posted by Recovox at 7:51 PM