Lance Armstrong - "Dude, are you that stupid?" 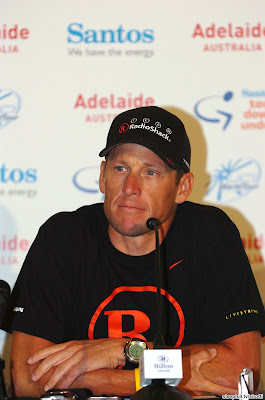 Lance Armstrong was not impressed when he was asked to respond to new allegations aired by Sports Illustrated at the beginning of stage two at the Tour Down Under this morning.

When first asked about the report, the seven-time winner of the Tour de France quickly said, "I have nothing to say."

When pressed on the detail in the investigative report by Selena Roberts and David Epstein, the result of work in which the pair "reviewed hundreds of pages of documents and interviewed dozens of sources in Europe, New Zealand and the U.S.," he repeated: "Like I said, I have nothing to say."

Journalists surrounding Armstrong pursued the line of questioning asking the American if he had at least read the article which appeared online hours before the stage from Tailem Bend to Mannum on the Murray River in South Australia. To that he admitted, "I perused it... there's nothing there."

The line of questioning moved on to what Armstrong and his RadioShack team were expecting from the day's stage before moving back to the damning report, at which point Armstrong's anger and frustration boiled to the surface.

"Dude, are you that stupid?" Armstrong asked of the reporter concerned. "What part of I'm not commenting is not clear to you?"

The journalist was then told by Armstrong that if he intended on continuing with his questioning then he should leave.

A few minutes later and slightly calmer, Armstrong told the gathered media that he didn't "have anything to worry about on any level."
Posted by Recovox at 12:27 PM