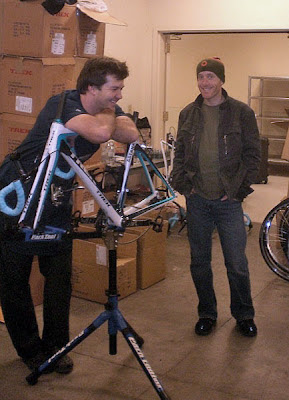 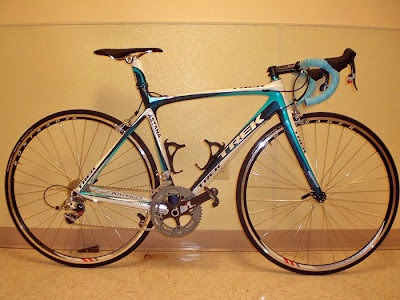 Jan 24, 2008 - Welcome to Day 1 of Astana Cycling's camp here in Albuquerque, New Mexico! It's really something to see a brand new organization get started from the ground up, and for the boys in blue the time has come to put into action what so many have been preparing for.

As I am sure you expect, lots of things have been going on behind-the-scenes in the days and weeks leading up to camp. From arranging flights and rooms for 40+ riders and staff to figuring out where to ride in and around ABQ, it's been a real team effort across the board. One staffer of note thought has to be Assistant Director / legend of cycling Viatcheslav "Eki" Ekimov. He's been here for a week prior and has been scouting out many different routes for the guys to use. Add in that he's fluent in several languages and he's quickly become the go-to guy for one and all.

Probably one of the most anticipated times of any cycling team's new season - pro or amateur - is getting to unpack and check out the new gear. Team Astana is no different as the soigneurs have been busy sorting through all the uniforms and casual wear and the mechanics get the Treks all built up with their new SRAM components. Trek engineer Mark Andrews and team liaison Ben Coates were joined by SRAM's Alex Wassnann to make sure everything was just right, and the word is: so far, so very good.


It was no surprise that Levi Leipheimer was the first rider on the scene, and long before he saw the inside of his hotel room he was down with the mechanics checking out his new ride and asking for some tweaks to his set up (also no surprise!). While the Madones and TTX bikes are the same ones we saw winning the Tour de France last year for Discovery Channel, one very noticeable difference is the Astana paint job. The general consensus is that it really "pops", both on the road and the TT bikes - see what you think:

To Read more on Team Astan's camp click on the title link....
Posted by Recovox at 3:36 PM