Astana Presents Itself To North America 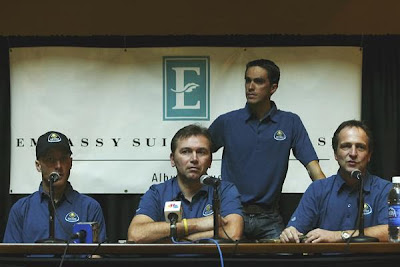 The new Astana team – taken over by ex-Discovery Channel Team Manager Johan Bruyneel – presented itself to assembled media during a pre-season training camp in the southwest American city of Albuquerque. Belgian Bruyneel spoke to the media yesterday, along side his first and third place finishers of last year's Tour de France, Alberto Contador and Levi Leipheimer, answering questions about the new programme and their hopes for the upcoming season.

"This is a completely new team," Bruyneel said bluntly. "The name of the sponsor is the same but the management has changed, the structure has changed, the riders have changed – and above all I think the philosophy has changed.

"I was surprised by the passion and the determination to keep this team going," he noted regarding the sponsor's willingness to continue after last year's scandals. Astana is a group of businesses based in Kazakhstan's capital city that first got involved with the sport in mid-2006 thanks to the successes of Alexander Vinokourov, who was thrown out of last year's Tour.

"It's been a big challenge, but I think it looked a lot bigger when I started then when I look back on it now. I'm very confident we will pull this off and make this like any other team."

To read on click on title link.
Posted by Recovox at 10:28 AM