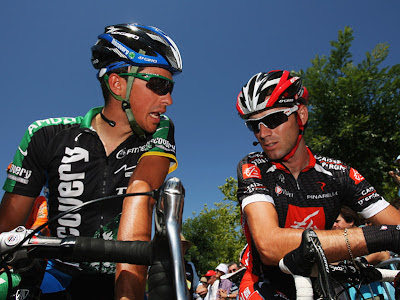 Torri said on Monday that he wanted to speak to certain foreign-based cyclists, as well as the man central to the whole scandal, Dr Eufemiano Fuentes.

Several high-profile riders who were implicated in the affair have seen their careers derailed by it, notably the likes of 2006 Tour of Italy champion Ivan Basso, suspended until the end of 2008 after admitting to have contacted Dr Fuentes with the view to undergoing blood doping.

Another is German 1997 Tour de France champion Jan Ullrich, whose name became so tainted by the affair that he decided to retire last year after he was sacked by his T-Mobile team.

But Spanish stars such as Contador and Valverde are still racing competitively after Spanish authorities decided to drop their investigations into the scandal. Now the Italians want to carry out their own probe into the Spanish cyclists.

"We want to hear the doctors Fuentes and (Merino) Batres (the other doctor involved) as well as the Spanish cyclists involved in the Puerto affair," Torri told Rai radio. "It's not right to talk about reopening (the case). Coni prosecutors are still investigating implicated Italian cyclists. Now there is simply a new bid to speak to the foreign doctors, trainers and cyclists implicated."

Italian authorities are known to be bitter that while their star rider Basso is serving a suspension, other high-profile riders from other countries are still free to race.

"It's not fair that our top stars, such as Basso, have been suspended while other notable athletes implicated in the Spanish affair continue to race on without any consequences," added Torri.

Italian laws allow Coni prosecutors to investigate riders, trainers and doctors even if they do not hold an Italian licence. Should they be found guilty, they could be barred from taking part in races on Italian soil.

While this normally would not prevent those riders from taking part in the Tour de France or major events such as the world championships, that would not be the case this season as the worlds are due to be held in Italy and one stage on the Tour will also finish in Italy.

"Contador and Valverde? Yes, I'm also thinking about them," added Torri. "It's always painful for us to suspend an athlete, but if they are responsible (guilty)..."

The Puerto scandal broke in May 2006 with the arrest of Dr Fuentes. More than 200 bags of blood were seized from his laboratory along with material to perform blood transfusions, steroids, EPO, hormones and other doping products. More than 60 cyclists were implicated in the affair but few have so far been convicted of doping and only Basso among the star names.
Posted by Recovox at 8:58 PM