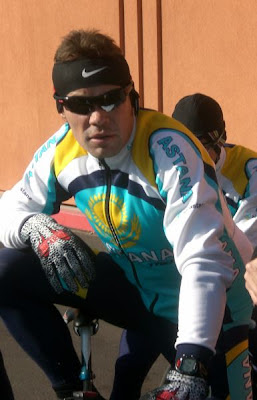 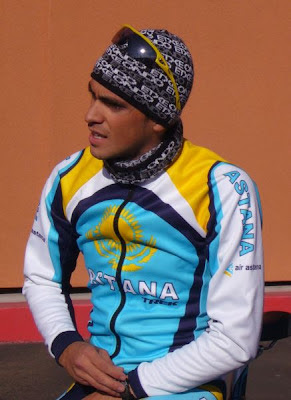 Jan 25, 2008 - Welcome to partly sunny / not-too-cold ABQ as Day Two of camp gets going. When the riders headed out this morning for a 3 1/2 hour "easy ride, slightly hilly" it was 38F/3C with a high of 49F/9C by ride's end, and so they all broke out their new winter gear to stay warm in the initial part of the work out. Some of the guys already wanted little more warmth (you need that when you're running 6% and below body fat!) as Goose and Jani headed to he local Trek store for another base layer under their kits.

Following yesterday's first ride together there was unanimous praise not only for how their Trek bikes worked, but for how sharp they looked as well. The guys also really appreciated having a large group to ride with as most of them have been training - in warmer climates - either solo or with one or two friends. While they'll stay in a big group for a while they'll soon break out into separate packs as some guys ramp up for the early season while others are riding more to build their fitness.

For the 2007 Astana riders it was time for a mini reunion, while for American riders Levi Leipheimer and Chris Horner it was literally a time of introduction to many of their new teammates. Levi's already sporting his new USPro Champion jersey and will have his matching shorts in plenty of time to defend his Tour of California championship.

To read more from CB click on the title link
Posted by Recovox at 10:48 AM