Checking In With Team Astana 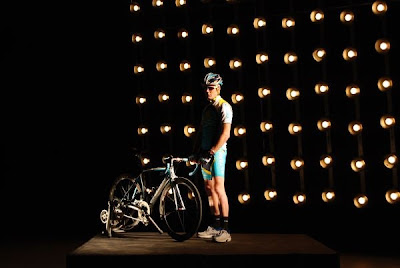 Team Astana has been in Albuquerque for a full week now. Tuesday and Wednesday were media days for the team and for many of the guys this meant answering a lot of questions and smiling for the camera as journalists and photographers from around the world came to meet and greet the team. With the sport of cycling continuing to grow in popularity around the world, journalists have come from as far away as Japan, China and Belgium to take a look at Johan Bruyneel's new team. It's a busy time for the guys and makes for long days for everyone.

Tuesday was an easy day of riding and today's longer ride was cut a little short due to SNOW! The guys were riding in temperatures hovering around 30F and while I didn't actually hear any complaining about it, with so little body fat on the guys to insulate against the cold it had to be somewhat tough on them.

Also on the schedule these past two days has been plenty of filming and interviews for Versus. The filming is being done in a giant sound stage owned by Albuquerque Main Studios. All of the guys have been on site for photos, but Andreas Kloden, Levi Leipheimer, Chris Horner, and Alberto Contador have gone in for additional shots in front of special backdrops and stages. This footage will be used during Versus' coverage of the Amgen Tour of California as well as spring races and of course the Tour de France. Look for pieces filmed in front of a hanging bicycle and a big wall of lights-those spots were filmed here in ABQ during camp.

Click on title link to read on.
Posted by Recovox at 9:50 AM