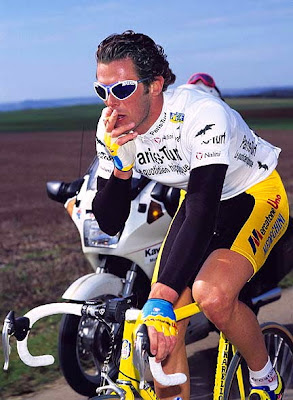 Mario Cipollini, winner of 42 Giro d'Italia stages and the 2002 Milano-Sanremo, is biding his time to sign with Mike Ball's Rock Racing team. The 40 year-old Italian who retired in 2005 is pondering a dual-pronged comeback with the USA Continental team – both as a rider and as a team manager. However, he said to the Italian paper La Gazzetta dello Sport that "if they don't give me a straight response I will return home."

The ex-cyclist, known as "Super Mario" for his sprinting prowess in the nineties and early 2000s, is in Santa Monica, California, to meet with the prospective team and its staff. As previously reported, the idea was that Cipollini could return as a cyclist in the Tour of California next month, however an agreement has not been made between the outspoken executive behind the fashion label Rock & Republic and the charismatic Lucchese.

"You don't have an idea in what kind of conditions I find myself. The project, the programmes, the structure: all of it was shared together with Mike Ball. And now I see there are problems, the scenario is different, his collaborators are bucking," stated Cipollini, who last raced as a professional at the Milano-Sanremo with Team Liquigas-Bianchi in 2005.

"It is better that I vent a little bit on the bicycle before I go and meet them. I have asked for a face-to-face meeting to reach a definitive answer. Either there is a contract, or there is a return home."

Cipollini and Ball first met at the trade show in Las Vegas where the idea of cooperation evolved. With the awareness of the former sprinter in Italy, the team would have better chances of receiving wildcard invites to races like Tirreno-Adriatico, Sanremo or even the Giro d'Italia. However, the team is only registered for 2008 as a Continental team, which prohibits its participation at least for the duration of this year.

The former racer envisions a larger-scaled project (rumoured names include the Schleck brothers and Basso - ed.) that could see Ball's team on top of the world in five years, however he wants to have his way with the team on the other side of the Atlantic. "I have been here since Monday," continued Cipollini, who arrived to the USA with his lawyer Giuseppe Napoleone.

"We have had meetings after meetings. The problem is not Ball, not my money, the use of my image, or investments, but it is the men that are around [Ball] and who are afraid to lose out on this proposed structure in Europe that I would manage. I came here in October, and I started to explain some things about cycling, like how the Giro d'Italia will celebrate 100 years in 2009, and they looked at me with mouths wide open.

"Ball came from nothing in his life. It was him who wanted to know me in Las Vegas. ... The project we created together. I asked for and obtained a carte blanche – not to have intermediaries – and he gave it to me."

Ball has made controversial contracts with riders involved in past doping scandal. Maybe Cipollini, like Frankie Andreu before him, is finding the waters to be rocky. "I was clear with him on [Oscar] Sevilla, [Santiago] Botero and [Tyler] Hamilton, who he has already signed. I said to Ball that it is not the right way to interpret cycling, that these riders would never be able to race in a European team. He gave me his reasoning, that they would only race in America. However, they take from the staff new requests, like 'Cipollini has to be a manager also in the USA, he has to transfer here for some time.' For this reason I no longer understand any of it."

Meetings were expected for later on Saturday. Depending on the outcome Cipollini will either be spreading his wings to fly home for good from LAX (Los Angeles International Airport) or to take on the final kilometres of the Tour of California's sprint stages coming up in February.
Posted by Recovox at 9:33 PM