Paolo Bettini Sets His Goals For 2008 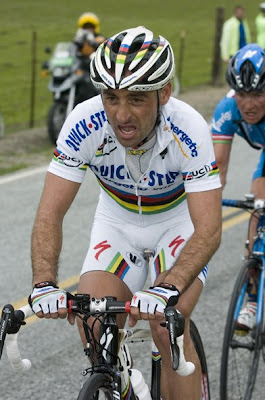 Paolo Bettini already has back-to-back world titles, so why not aim for a repeat with the Olympic gold medal? Better yet, why not go out big and shoot for the double-gold and bag the world title and Olympic title in one final blaze of glory?

That's the Italian's thinking, at least, as he rattles off top goals for the 2008 campaign.

"The 2008 season will be very unique for me, one full of challenges because they are two-fold - first, to try to win the gold in August in Beijing and then the world title in my home country in Varese," Bettini told La Deniere Heure during a break in team camp this week in Spain. "To try to achieve the double would be fantastic. No one's ever done it before."

At 33, Bettini still can afford to dream big in what could be his final season. The QuickStep-Innergetic rider promises to try to live up to his ambitious goals for the season.

"The motivation is still there," says the defending Olympic champion. "The passion for racing remains and the hope to improve is strong."

Bettini promises a full racing schedule, with a run through the Classics (though he might skip Paris-Roubaix) and bounce through the Tour de France and Vuelta a España to hone his form, respectively, for the Olympics and world championships.

"The only thing crazier would be to ride the Giro, too," he said. "Then ride two weeks of the Tour and then all the way to Madrid with the Vuelta, but that's too hard. To race two complete grand tours is too hard. Ideally, I would race the Tour to prepare for the Olympics and the Vuelta for the world's."

With the way Bettini is talking, it's hard to imagine that he would retire at the end of this season as he previously hinted.

If he delivers the golden-double, it would be easy to picture 2009 turning into a season-long celebration farewell parade before he hangs up the cleats for good.
Posted by Recovox at 9:32 AM