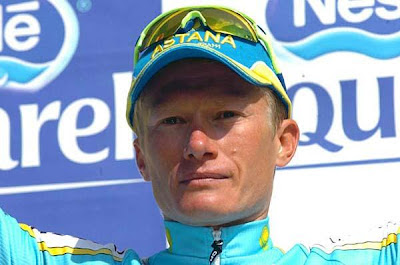 While the International Cycling Union is preparing to appeal the one-year suspension given to Alexandre Vinokourov by the Kazakh cycling federation for blood doping during the last Tour de France, the former Astana rider has turned a page in his career. Back in his home country, 'Vino' is planning new professional projects such as the construction of a sports hotel in Southern France and a restaurant in Nice.

"I didn't imagine to end my career this way," the 2003 Tour de France podium finisher told L'Equipe on Wednesday, December 12, after announcing last week that he would not consider a return to racing next year even if his reduced ban would make this possible. "I've earned a good living and it is time to move on to something else, also because they don't want me in cycling anymore."
Posted by Recovox at 4:29 PM