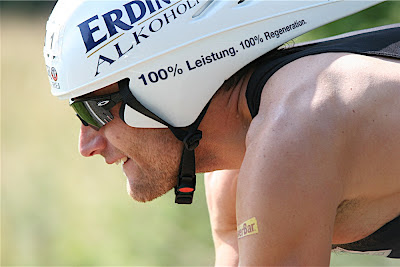 After a long, grueling season of training and racing, what triathlete wouldn't want to spend a weekend frolicking in the sand and surf of dazzling Laguna Phuket? Sure enough, throngs of multisport elite hightailed it to the Thai resort destination December 2 to take a much-deserved load off-after squeezing in one more swim-bike-run challenge. This year's edition of Laguna Phuket Triathlon featured newly crowned Ironman world champion Chrissie Wellington, 2007 Ironman 70.3 world champ Mirinda Carfrae, 2005 Ironman Hawaii winner Faris Al-Sultan and long-course studs Bryan Rhodes, Belinda Granger and Richie Cunningham. But it was Laguna Phuket veteran Massimo Cigana of Italy and resurgent Brit Liz Blatchford who outshone the rest on Sunday, taking the men's and women's titles in 2:31:46 and 2:42:24, respectively.

Kicking off from the beach separating the Dusit Laguna Resort and Laguna Phuket Resort, swimmers stroked 1.8km through the bath-like Andaman Sea and then, after a short beach sprint, through an accompanying lagoon. Italian Leonardo Ballerini led all men out of the water in 22:15, followed by Canada's Mathieu O'Halloran in 22:36 and Al-Sultan of Germany in 23:19. Cigana then put the pedal to the metal on the bike, completing the winding, hilly 55km tour in a day's-best 1:21:05. Aussie Cunningham wheeled in second in 1:24:38, just seven seconds of Rhodes. The Italian stallion kept up his lead on the run, crossing the line in first place with a sparkling overall time of 2:31:46, besting Cunningham's 2:33:29 by almost two minutes. The resilient former Ironman world champ, Al-Sultan, hung on for third place with a time of 2:34:30.

In the women's pro race, Blatchford, who's back in action after a nine-month recovery period following a spinal cord operation, finished the non-wetsuit swim over a minute up on next-closest female Valentina Filipetto of Italy in 23:38. Carfrae hit the beach third in 25:27. Granger then turned up the heat on the bike, busting out a speedy 1:28:39 on the snaking pedal through the jungle; Carfae hit T2 almost one minute later, followed by Blatchford in 1:30:57. On the two-lap 12km run, it was all Blatchford-the Brit used a 45:43 split to motor past the leader to finish first in 2:42:24 overall. Carfrae took second in 2:44:28, while Granger placed third in 2:46:47.