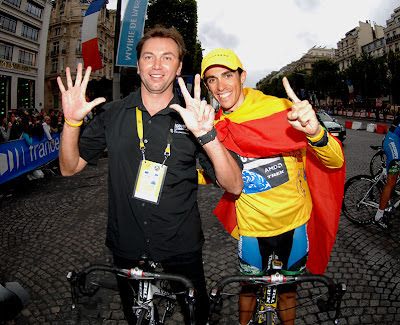 After closing its first team meeting in Javea close to Alicante, Spain, Astana team manager Johan Bruyneel has drawn positive conclusions. "It was a first contact meeting and served to get to know us all better," the Belgian told Spanish media. "At first, it was a bit strange for everyone as people came in from two different squads, but then the newcomers adapted well. Everyone returned home feeling confident because they saw a solid structure within the team."

The former Discovery Channel directeur sportif also revealed that if it hadn't been for the team's leader Alberto Contador, Bruyneel may not have continued as manager for Astana. "I had taken the decision to quit, as all my goals on a sporting level had been reached," he said. "But now, the challenge is to get this team going. Without Alberto Contador, I wouldn't have continued. He's a great basis to construct a new team - he is young, and amongst the best. Signing him convinced me of continuing."

The man who directed Lance Armstrong on the roads to seven Tour de France victories - and Contador to one - was full of praise for the Spaniard, but also weighed in that Contador had yet to improve certain aspects of his cycling talent in order to become a great champion. "Alberto is one of the best, but there are other riders that hold the same promises, the Belgian explained. "He has to show that he can win the Tour once again, and he can count on our full confidence to do this. He has all the factors on his side. He has the physical and capacity of a champion, and he still has a margin for progress. But he needs to improve his time trialling skills and learn to dose his forces well on a three-week race."

Bruyneel even added that Contador had "some things that remind me of Armstrong. He will be the figure of the future." The Spaniard will prepare for the big goal in July along the same lines as this year, as his racing programme includes the Mallorca Challenge for starters, followed by the Vuelta a Valencia, Paris-Nice, Vuelta a Castilla-León, Vuelta al País Vasco/Circuit de la Sarthe, Flèche Wallonne, Liège-Bastogne-Liège and Dauphiné Libéré.
Posted by Recovox at 5:20 PM