Basso Gives Back With Intervita 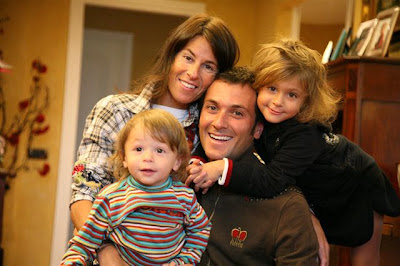 It's the time of year when many people dip into their pocketbooks and give not to friends and family, but to the charities they believe in, and cyclists are no different. Ivan Basso donned the white and black jersey of Inervita not just for the December 8 at the Pedalata Con I Campioni charity ride, but will make good use of his time spent under suspension by wearing the jersey of the worldwide orphaned children's fund at charity events throughout 2008.

Basso, who has been involved with the organization since 2004, will partner with the charity to raise awareness and funds after several years of donating a percentage of his earnings to he and his wife Micaela's chosen fund. "Intervita knew about this idea and they asked me if I would unite with them for 2008 and give a contribution, not only economically like I usually did, but also with my image and I said yes," Basso told Cyclingnews. He has volunteered to wear the self designed and unique Intervita jersey at all of the major fund raisers he will attend in the 2008 calendar year.

The first event took place on December 8th at the Pedalata Con I Campioni, where the public was invited on a charity group ride with the professional cyclists including Basso, on a forty-five kilometer circuit that started and finished in the small town of Brinzio, located on the outskirts of Varese.

Basso will not only be attending events in Europe, but will spend five days in Dubai, Arabia, the country chosen to receive the funds that Intervita has raised. "I will go to visit the third world country to visit where the money goes," said Basso. "We decide which country is the most necessary to send the funds to."

It is not unusual for riders to attend charity events in their off season but there is usually a fee attached to the invitation, but Basso clarified that he will not ask for an appearance fee, instead he asks for a portion of funds raised due to his attendance go toward Intervita, in the form of adopting a child.

"There are a lot of organizations in the world but I think it is important that if you can help some or at least one organization, that is good."
Posted by Recovox at 5:14 PM