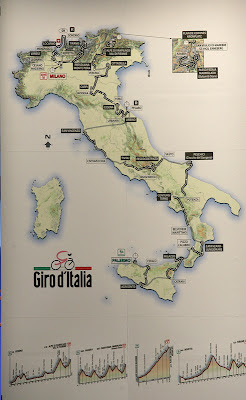 The 91st edition of the Giro d'Italia will begin in Palermo and end in Milan after covering 3423.8km over 23 days, it was announced on Saturday.

The exact course for the 2008 Giro, which begins May 10, was presented at a ceremony in Milan's Arcimboldi Theatre.

It will begin with a team time trial and end with a 23.5km race against the clock. There will also be two other time trials throughout the race, including a 13.8km mountain time trial finishing atop the famous Plan de Corones.

The highest point the race will visit will be the 2618m Passo Gavia, part of a punishing penultimate stage that will also take in the climbs of Mortirolo and Aprica.

The race will visit two other countries during the 23 days, taking trips into San Marino and Switzerland.

Italian Olympic Committee president Gianni Petrucci said the course would be the ideal preparation for Italy's Olympic atheletes, who would then travel to Beijing in August for the summer Games.

"It will be an exciting Giro that will help (Italy's Olympic cycling coach) Franco Ballerini to prepare the squad for the Olympics in Beijing," Petrucci told Rai television, before turning his attentions to the fight against doping in the sport.

"How do we fight it? By continuing to do what we are already doing," he said. "We hope that after the Giro d'Italia the Italian squad, among the strongest in the world, will reaffirm its strength."

Italian cycling federation president Renato Di Rocco said he hoped it would be a clean race and gave his backing to the so-called biological passport, introduced this year to professional cycling in a bid to monitor cyclists to better detect changes that demonstrate doping.

He also dismissed suggestions that the doping scandals over the last two years will affect public interest in the Giro.

"The biological passport is a great opportunity to be more careful. We have already adopted it with 80 young cyclists," he said. "Such is the huge affection towards the Giro that it will (still) command a lot of attention."
Posted by Recovox at 3:51 PM