Bennett wins a few races and a lot of money! 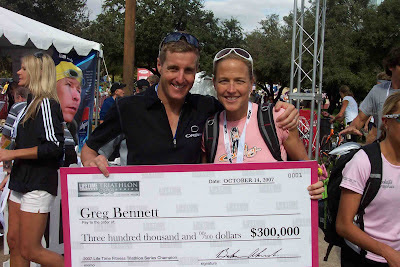 No single triathlete had a bigger year than Aussie Greg Bennett. Before the season got underway, Bennett set his sights on just five races. While most of his cohorts spent the year bolstering their ITU resume with hopes of making it to Beijing, Bennett spent 2008 racing some of the world’s best athletes in the Lifetime Fitness Series.

Bennett was dominant in all five events, his only close call coming at the Los Angeles Triathlon, where he had to run down his friend and countryman Craig Walton in the final mile. That set the stage for the inaugural Toyota U.S. Open Championship, in Dallas, where a win would give Bennett an unprecedented $420,000 payday. The Aussie usually waits until the run to make his big move, but in Dallas he put the hammer down from the start en route to a 1:44:41 finish and the biggest win of his career.

Bennett’s total earnings in the five Lifetime Fitness races was over half a million dollars, not bad, considering his wife, Laura, also won $200,000 at the Hy-Vee World Cup.
Posted by Recovox at 5:53 PM