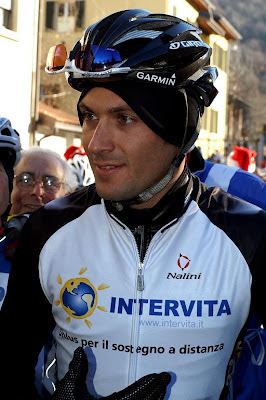 Ivan Basso, who was banned until 24 October, 2008 for his involvement in Operación Puerto, continues to ride and maintain some of the form that saw him win the 2006 Giro d'Italia. He has formed an alliance with Intervita, a non-governmental organisation formed to benefit disadvantaged children in the southern hemisphere, and will wear its colours when he partakes in various charity rides.

The 30 year-old took part in the Pedala con i Campioni last week in his home zone of Varese. Basso has directed his efforts towards a baby girl in India, where Intervita has been present since 1999 in the region of Maharashtra.

"I will be happy to help the association in its work," said Basso. "It is a solid gesture of helping the unfortunate to construct a better future for themselves and their communities." He will continue to take part in charity rides with the Granfondo del Deserto, in Dubai, United Arab Emirates, January 29 to February 5.

"I have returned to ride in the group," said the ex-Discovery Channel rider on his website, ivanbasso.it. "I have never stopped training. ... Everyday I effectively ride three to four hours. ... I also am in the gym, to complete my winter preparations."
Posted by Recovox at 5:54 PM