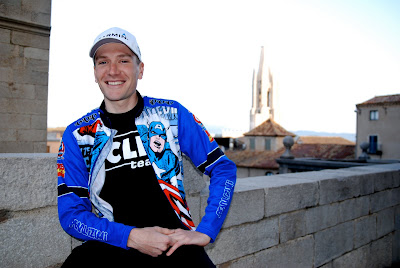 After a purple patch of form at the tail-end of 2009, Garmin-Transitions' Dave Zabriskie says he is more mature and ready to carry on where he left off in the Tour of California and Tour de France in 2010. Zabriskie won the first stage race of his career in September last year at the Tour of Missouri, a victory that came two weeks after he won his fourth consecutive title at the US national time trial championships.

That short period marked a watershed moment for Zabrizkie, who despite glittering displays of talent throughout his ten-year career - and stage wins in all three Grand Tours - had never claimed the overall in a stage race. But his ability to handle the responsibilities of leading a team and a race has given the American more confidence. Zabriskie and his team manager, Jonathan Vaughters, now both believe he is comfortable in the role of team leader – something Garmin hopes will become more consistent this season.

"Missouri was amazing. I always try to win but it just worked out that time," Zabriskie us. "The team were asking me 'what should we do here and there' and I guess I had to make some tough decisions. I had to come to a quick realisation that I was leading the race and they were coming to me for guidance on how I wanted them to do things."

As for his leadership style Zabriskie confessed that he’s not the type to crack the whip, instead opting for a cooler, calmer approach: "I definitely don’t like being told what to do so I’m not going to tell them what to do in the fashion of an asshole. I try to be as nice as possible."

His approach to captaincy will be exposed to further tests this year with the Tour of California shifting from its usual slot in February to May. Zabriskie was second to Levi Leiphiemer in 2009 but is confident that he can bring his best form to the race and then hold it until the Tour de France in July.

"I’d like to be tip top for California and then try and hold that form for the Tour. Cali isn’t going to be easy but I’ll take it day-by-day there and see how I’m going. It’s still too early to call. All I know for certain is that those last three days look pretty difficult. The time trial is a little different too. The last day is really hard; it’s one of the hardest days I’ve seen for a finishing circuit."

Zabriskie's ability to hold that form until the Tour could have a fascinating effect on his season. He has never shone in the final overall of a three-week race but Vaughters has made a habit of propelling talented riders like Vande Velde and Wiggins to the Tour’s top four in the last two seasons.

"I think Dave has grown a lot as a rider. He’s more mature," Vaughters said. "I think as far as a leadership role he really started to grow and become comfortable in his own skin at the Tour of Missouri. He’s never had to defend a race lead like that. The Tour of Missouri and the Tour de France are a long way part from each other but Dave is someone who can climb a lot better than people think and he can time trial with some of the best in the world.

Understandably, Zabriskie is playing down such compliments.

"It would be nice, wouldn’t it? But it’s up to me to make that happen. It’s cool that Jonathan has that belief and in me. I take it seriously, for sure, it’s just not that easy to do. I’ll try though."

One area that Zabriskie has ear-marked as a potential boost to his chances is a change of diet, after recent tests conducted by the team revealed he has intolerances to a number of foods. "My body is super sensitive. I’m the worst one on the team and you name it, I’m allergic to it – all dairies, oregano, basil, garlic, beef, pineapple, strawberries, sprouts, beans, sardines, a lot of fishes, the list goes on. I’ve never even know about this stuff and it could make a difference."

Vaughters also believes that Zabriskie can make improvements on the bike, too: "What’s limited him in the past is that he doesn’t necessarily want to concentrate on staying at the front of the bunch day-after-day, that’s very challenging for him to do that. I don’t know if he’s ever had the ambition to do that before.