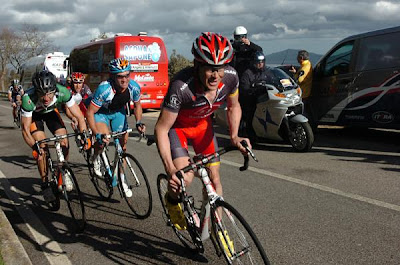 Team RadioShack’s Chris Horner finished 2nd in the uphill finish in Nuoro in the 2nd stage of the Tour of Sardinia. Roman Kreuziger (Liquigas) was the strongest of a dozen of riders who went to the final 8 K uphill on the Monte Ortobene. The Liquigas rider takes over the race lead to Horner by four seconds. Jani Brajkovic also put in a good ride, taking 6th from the select group of riders that finished together on the climb. Team riders Ivan Rovny and Ben Hermans came in just after twenty-seconds later.

After the stage Horner said, “I feel good, very good. Even yesterday I could have won if the profile in the race book would have been correct (last K uphill instead of downhill…). Today Kreuziger was stronger. The climb was long but not so steep. Not steep enough for a real climber like me. We had the wind in the back. It was more a finish for riders with the real power in the legs.”

“I am very happy about the atmosphere in the Team,” said Team Director Alain Gallopin. “Everybody works hard with a smile. There is a real good spirit in the Team. Winning or not winning, that’s the responsibility of the rider. We are close again. Maybe as important is the team spirit and that spirit is really good.”

The Giro di Sardegna continues on Thursday with stage 3 which travels 206km/128mi from Nuoro to Oristano in the longest stage of the race. With three stages to go and only four seconds keeping Horner from the leader’s jersey, look for strategy to come in to play on the roads of Sardegna as Team RadioShack hope to move up.