Alonso and Contador collaboration still on the cards 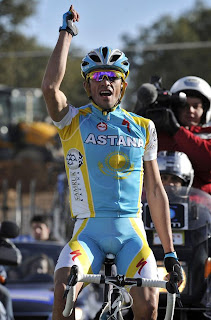 Last year, the two Spaniards had mooted the possibility of collaboration as doubt swirled around Contador's team for the 2010 season. The latter's eventual resolution with Astana hosed down further discussion of the partnership, but in an interview with British newspaper The Guardian published on Tuesday Alonso re-ignited the prospect of a Spanish super-team forming in the next few years.

"It's a project for me – a kind of dream I have because I love cycling. Creating a top team and being in a position to win the Tour de France will give me a nice feeling," said the 2005 and 2006 Formula One World Champion, who took the opportunity to train with Olympic champion Samuel Sánchez (Euskaltel-Euskadi) and several of Contador's Astana teammates during the European winter.

Despite obvious differences between his chosen sport and professional cycling, increasing parallels between the set-up of Formula One teams and their two-wheeled counterparts adds significant clout to Alonso's renewed statement of intent.

However, in spite of his enthusiasm for the project, Alonso's direct experience with the complexities of a high-level sporting organisation will command a patient approach to any cycling set-up. "I know it is not easy to create a top team from zero. You need good riders, good staff, a lot of preparation and, most important, a lot of sponsors. So I don't think we are in the right moment to start a project like this, because of the world economy," he told the newspaper.

Despite the measure of caution, Alonso, who will commence the first of a three-year contract as a pilot for Ferrari this year, hasn't ruled out the possibility of the Contador-led cycling galácticos coming together before the end of his own professional sporting career.

"It is something Alberto and I can work on. As I said I'm very open," he said. "I know this year he is with Astana but from next year onwards, for sure, if there is an opportunity I will be very interested. I think he will be interested as well."

Speaking at the Tour of the Algarve last week, a member of Contador's support team confirmed that the Spaniard is still interested in linking up with Alonso in the future. However, it was indicated that such a move is unlikely to happen when Contador's existing contract with Astana runs out at the end of this season.

Those close to Contador believe that the demands on Alonso's time will be greater than ever now that he is with Ferrari, making it more likely that the 2007 and 2009 Tour de France champion will either extend his current agreement with Astana or look for a deal with another squad. Caisse d'Epargne still looks a strong option, assuming their management can tie up a deal with a new backer in the next few months.
Posted by Recovox at 11:06 AM