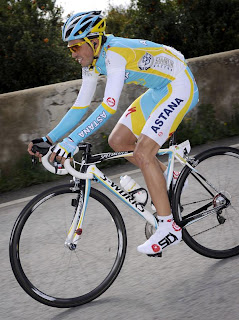 Alberto Contador hammered home his first win of the season atop the Alto do Malhão in the Volta ao Algarve today. His Astana team set-up the two-time Tour de France winner perfectly to claim the mountaintop stage ahead of RadioShack's Tiago Machado and Levi Leipheimer.

With the help of Astana's new mountain domestique, David de la Fuente, Contador pulled away from the peloton on the final 2.7 kilometre ascent to secure both the stage win and overall lead in the race. The result meant Contador went one better than the equivalent stage last year where he finished second to Antonio Colom.

Machado rolled in 11 seconds later, with Leipheimer at 22 seconds - within striking distance for the RadioShack riders to fight for the overall on Sunday's final 17.5 kilometre time trial in Portimão.
Posted by Recovox at 10:19 AM