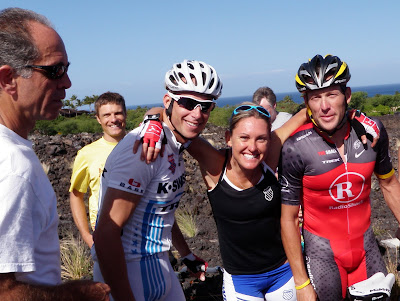 All because of a little TWEET TWEET Queen K endured a little rumble on the rock. I'm talking they passed cars, sounded like a train, and scared even the whales further out to sea. It was pretty cool. Before I begin, I like both the guys, not that I'm "friends" with either of them, but I respect both for various reasons and admire them both for various reasons, I'm a Kalani Robb fan if we are being honest.

About 9:35 this morning the rock shook like an earth quake. I had a long ride that turned too fast, and some local crowd support showed up to cheer. Our island is big Lance fans, he supports one of our local canoe clubs so we love him, he keeps the boys in the water. Most the town showed up in Lance shirts and so did the canoe boys, on Trek bikes of course. Then a handful of triathletes showed up hoping a triathlete can take down a cyclist...it was kind of funny to see the "sides". I was mutual and just up for a good show.