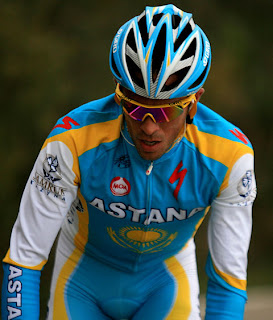 Alberto Contador returns to competition tomorrow after the longest voluntary rest period of his career, which makes the Volta ao Algarve a race that Astana’s leader has looked forward to with great desire, even though he also says, precisely for that reason, that “I won't have the same possibilities as in 2009, when I won the general.”

You’ve reached the first race of 2010—how are you doing?

I can’t wait. I’m a rider that likes to compete and that’s what motivates me. I think that I’m getting to a good level, but not like at this time in 2009, when I won. I’m fine, but what I’m looking for is doing a good warm-up for Paris-Nice, which I do want to ride to win.

Can you compare how you feel now with how you felt last year?

I feel good, but in 2009 I came from training camp in the United States where I worked really well, but this year there’s been very bad weather in Madrid and I haven’t trained the way I’d like. Anyway, it’s the first race of the year and there’s no need to worry about it too much.

Have you changed your winter preparation or have you continued as in past years?

No, I’ve done more or less the same as in the past, maybe with more long training sessions than in 2009, with the idea of tweaking my weight a little, because I’m still at 63.5 kg, two kilograms above my Tour weight, and it’s noticeable.

How's the route of Volta ao Algarve 2010 for you, better or worse than last year?

It’s very good for a warm-up, but it’s a little worse for me than in 2009, because it’s got a time trial that’s shorter and totally flat, they tell me. Last year’s race was very hard and that allowed me to take some time differences. This year, on the other hand, there are other riders better suited to this route.

What’s the participation going to be like? Who are the favorites?

Lacking confirmation of official bib numbers, I know that Leipheimer, Klöden, Luis León Sánchez, Iván Gutiérrez, Samuel Sánchez and Vande Velde are coming. And you have to take into account, among others, Chavanel, Ezequiel Mosquera and Joaquín Rodriguez, and not forget the riders from the Portuguese teams, who are very good and will have special motivation at home.

Do you want to check how you measure up to your rivals?

No, I only want to check my state of form and how I respond in a race, it’s not a question of making comparisons.

This has been the longest period of time that you’ve ever experienced out of competition, did time seem to drag for you?

Not at all, but starting up again is a handicap because you’re just a shade off the mark, it’s not like I finished at the Worlds. You have to train a lot in order to reach the same point, although there’s a good side to it, too. In the long run, it saves effort and the body appreciates it.

In 2010 do you think that you’ll be able to improve your performance and, if so, in the time trial? In the mountains? Where?

Yes, I think that I’m going to improve. In training sessions I’m very focused on working 100% and I think that I can improve both in the mountains and against the clock. I’m doing some tests and the results are even better that last year. I hope that that manifests itself in competition. (Interview by AC press room)
Posted by Recovox at 7:40 PM