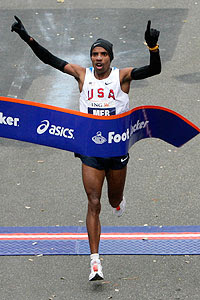 Meb Keflezighi became the first U.S. man to win the New York City Marathon since 1982 on Sunday, a victory that capped an outstanding day for American distance running.

Derartu Tulu of Ethiopia captured the women's race, with two-time defending champ Paula Radcliffe falling back to fourth, then grabbing her left leg in pain after finishing.

Keflezighi, the 2004 Olympic silver medalist, learned after a disappointing performance in the U.S. Olympic trials in New York two years ago he had a stress fracture in his hip. He capped the long and painful comeback with a landmark victory against a deep field for his first major marathon title.

That day in 2007 he also lost close friend Ryan Shay, who collapsed and died during the race. Keflezighi said the tears he shed after winning were for Shay.

"The USA gave me all the opportunities there is in education, sports and lifestyle," he said. "To be able to represent the USA is a big thing for me."

A field of nearly 44,000 started the 40th edition of the race. The 53-degree weather was about perfect for the runners, although they were slowed by 14 mph winds.

Keflezighi pulled away from Robert Cheruiyot of Kenya in the 23rd mile to beat the four-time Boston Marathon champ by 41 seconds. Alberto Salazar had been the last American men's champion, taking three straight titles from 1980-82.

Morocco's Jaouad Gharib finished third and Ryan Hall of the U.S. was fourth on a day when six Americans were in the top 10 for the first time since 1979. The race doubled at the national men's marathon championship.

Ludmila Petrova, a 41-year-old Russian, was the runner-up for the second straight year in the women's race, while Christelle Daunay of France was third.

Radcliffe said she had tendinitis behind her knee. The world record-holder from Britain failed to win a marathon for just the third time in 11 starts.

She had struggled with her weight and endurance after the birth of her second daughter three years ago. But when she ran well at a half-marathon in Philadelphia on Sept. 20, she decided to enter New York.

"I did not come here necessarily expecting to win," she said, "but I did expect to be a strong competitor."
Posted by Recovox at 1:31 PM