Sarah Reinertsen: In a Single Bound 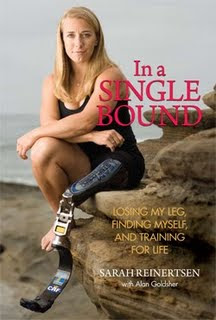 What self-respecting Ironman junkie will ever forget that finish? The one that was a year in the making after the gutsy and determined Sarah Reinertsen missed the bike cut off at the Ford Ironman World Championship in 2004 - which made Ironman fans cheer more a year later when she came back stronger, grittier and triathlon-tougher to become the first a female leg amputee to finish the race in Kona.

In a Single Bound: Losing My Leg, Finding Myself, and Training for Life by Sarah Reinertsen with Alan Goldsher tells the incredible story of the woman who was born with a birth defect that would require her leg be amputated. Growing up in Long Island she endured jeers and taunts from her schoolmates and was even told by one soccer coach to just go and kick a ball against a wall rather than be able to participate with the other kids.

Reinertsen would find running, though, and quickly became a world record holder. At 13 she became the fastest female above-the-knee amputee in history over 100 m. Eventually she would add the 200, 400 m titles to that list, along with both the half- and full marathon distance. In 1992 she was the youngest member of the American Paralympic Team that competed in Barcelona.

Then there was her amazing Ironman finish, followed a year later by an appearance and finish at the inaugural Foster Grant Ironman World Championship 70.3, a year in which she became even more of a celebrity as part of the reality show “The Amazing Race.”

In a Single Bound provides much more background about that journey – one that began after Reinertsen was inspired to take on the sport after interviewing Olympic athletes before the 2002 Olympic Games. We learn about the overwhelming challenges a disabled athlete faces as they try to figure out the logistics of getting through a race. We learn just how hard it was for Reinertsen to get into the pool to begin her Ironman training.

Most of all, though, we get the chance to be inspired again by this diminutive woman with a huge heart who never lets anything get in the way of her goals.
Posted by Recovox at 8:13 AM