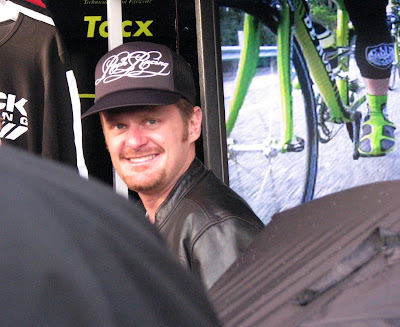 Landis and the Momentum Sports Group (MSG) announced Tuesday that they have mutually agreed to terminate his contract – originally slated to expire at the end of 2010 – releasing both sides from their respective obligations for the remainder of the 2009 and 2010 racing seasons.

"I wish to thank all of the sponsors for their support this year. I would also like to thank everyone at Momentum Sports Group," Landis said. "While I'm excited to pursue other opportunities, I will miss all of my teammates and everyone on staff."

Those opportunities, said Landis, include a hoped-for return to the European stage racing he’s missed since his two-year suspension for doping at the 2006 Tour de France. Landis returned to racing at the start of the 2009 season as a member of OUCH and has not enjoyed the level of success he saw before his ban.

According to a release issued by MSG on Tuesday, Landis told the team that he hopes to ride to ride “the longer, tougher stage races offered in Europe and internationally that better suit his strengths.”

The release went on to note that since the team will continue to focus on a domestic schedule, “MSG and Landis mutually agreed that it would be best for both parties to part ways at this time and allow Landis to seek a position with a team that could better accommodate his desires.”
Posted by Recovox at 7:25 PM