Basso will return to Tour de France in 2010 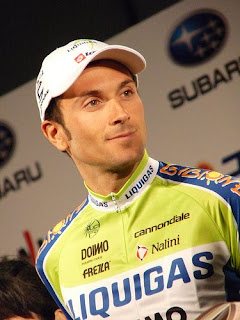 Italy's Ivan Basso will return to the Tour de France in 2010, four years after leaving on the eve of the race and the start of Operación Puerto. He will co-captain the Liquigas team at next year's Giro d'Italia with Franco Pellizotti and be one of three leaders at the Tour de France in July.

"I have the most experience of us for the Tour," Basso said. "Franco [Pellizotti] will not race for the classification and our two young guys [Vincenzo Nibali and Roman Kreuziger] will join me on the team. They will have more freedom if I am there with the big stars."

Basso returned to racing full-time this season after serving a two-year suspension for the Operación Puerto doping investigation. After finishing second and third respectively in the 2005 and 2004 Tours, he was a favourite for the win at the 2006 Tour de France, but the investigation forced him out of the race before it started and led to an eventual suspension.

He proved to still be competitive this year, finishing fifth at the Giro d'Italia and fourth at the Vuelta a España. Given the added confidence and days racing from 2009, he's able to start his 2010 season later than this year. Basso's first race of 2010 will be the Volta Ciclista a Catalunya, March 22 to 28.

"The journalists always looked to confirm that I had returned to my top form this year. I had form, but I was never able to be calm. With a year of racing, however, I am calm and secure.

"The second thing is that I am working on my back to achieve a better aero position for time trialling. My legs and the bike are perfect, but it is my relationship with the bike [which needs work]. I am working in the gym and stretching to improve."

Basso will co-captain the team at the Giro, May 8 to 30, with Pellizotti, who finished third overall this year. Liquigas will take all four of its classification men to the Tour, July 3 to 25: Basso, Pellizotti, Nibali and Kreuziger.

At this year's Tour, Pellizotti won the climbers' classification, while Nibali and Kreuziger finished seventh and ninth overall respectively. Next year, Pellizotti will aim for a stage win, leaving the team with three options for the overall classification.

"We are honest enough amongst ourselves to know who is going strongest, whether it is here at the training camp or in training before the race," said Basso.

Liquigas has to be united to beat Astana's Alberto Contador, RadioShack with Lance Armstrong, Levi Leipheimer and Andreas Klöden, and Saxo Bank's Fränk and Andy Schleck.

"More than the pavé in the first week, I am worried about Contador, who will be just as strong," said Basso. "I'm convinced Armstrong will have 15-20 percent more of his old feeling back, but then so will I."

Basso is currently taking part with all of team Liquigas at its training camp in Moena, Italy, on Passo San Pellegrino. Partly due to snow, the camp is mostly a chance for the riders to bond whereas training on the bike will be the focus of a second camp in Spain, December 14 to 22.
Posted by Recovox at 8:23 PM