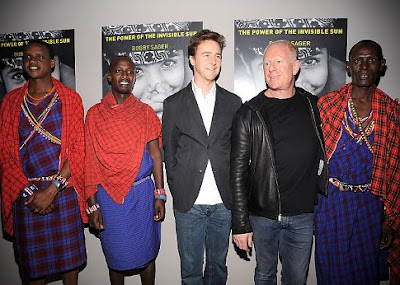 New York natives, celebrities and tourists mix on the city streets each day, and the New York City Marathon will be no different.

So don't be surprised if you spot Edward Norton running with three Masai warriors along the 26.2-mile stretch on Sunday. The 40-year-old actor is taking part to raise awareness and funds for Maasai Wilderness Conservation Trust, which works to preserve healthy ecosystems in East Africa.

Norton got involved with the cause after taking a trip to Kenya to climb Mount Kilimanjaro. He was inspired by the trust's mission, which helps the Masai stay in the area and make money from tourism without destroying their land.

"It literally is lions and elephants and giraffes and rhinoceros and things like that there," Norton says. "So if there's any ecosystem that's under threat on the planet that everybody has a sense of connection to, it's that one."

Working with the locals is a big part of charity, which is why Norton invited three Masai warriors he met in Africa to race with him.

The team recently ran in Central Park, and the warriors donned their traditional colorful clothes, necklaces and bracelets.

Don't expect them to switch to shorts or sweats on the big day.

"They're very comfortable in those," Norton says. "That's what they walk and run in at home. That's just sort of their normal day-to-day wear, and they're really comfortable in it.

"The only thing they're still debating a little bit is whether to switch from their sandals to running shoes," he adds. "They like their sandals and that's what they run in at home, but they had never run on pavement before, and so they're debating maybe wearing Pumas."

Norton, however, has no plans to attempt sprinting in sandals. "I think it would destroy me," he admits.

The actor has already injured his shins and pulled his Achilles tendon while training. "But I think I've come into the good zone," he says. "I'm trying to rest this week, mostly."

He won't have too much down time before the race, though. The three warriors are staying with him in his Manhattan pad.

"For two of them, it's their first trip out of Kenya," Norton reveals. "I think they find a lot of [New York City] strange and intense. The community they come from is 7,000 people in about 300 square miles. They're going to run a race with 40,000 people at the head of the bridge.

"The density of people is one of the things that's most striking to them," he adds. "They're really just staggered by how many people are here."

While the warriors are stoic and rarely give huge reactions, they've found certain aspects of New York life fascinating.

"They think the amount of attention we pay to our dogs is really strange - the dogs on leashes and cleaning up after them," Norton says. "Amidst all the tall buildings and everything, I constantly am seeing them double-take at a different type of dog. And when the person's picking up after it, they just start laughing."

The warriors were particularly impressed with the Art Deco steel eagle heads they spotted on the Chrysler Building through binoculars.

They'll see some more stunning views on Sunday. "I'm excited for the Verrazano Bridge right at the start," Norton says. "That should be really dramatic. I'm hoping I can be on the upper deck, because seeing over the city and all the way to where you've got to end up is kind of cool. I'm definitely most intimidated by the Queensboro Bridge. Everyone says that's just the soul-killer."

Norton won't be the only celebrity barreling through the boroughs. He's recruited Alanis Morissette and David Blaine to run for the Masai trust, though Blaine might be out since he hurt his heel while training.

Former "ER" star Anthony Edwards will join Tony-winning actress Sarah Jones and "Mercy" star James LeGros in running for the Shoe4Africa charity, which raises money for a planned children's hospital in the northwest.

And Christopher Reeve's son Matthew is running on behalf of the Christopher and Dana Reeve Foundation to raise money for spinal-cord-injury research.
Posted by Recovox at 8:09 PM