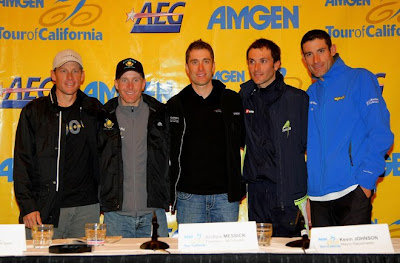 The 2010 Tour of California will venture high up into the Sierra Nevada Mountains, dispense with the traditional prologue, include a time trial in Los Angeles and feature the first mountaintop finish in the race’s 4-year history at Big Bear.

The biggest change for the 8-day event remains the move from February to May (16-23), pitting it against the Giro d’Italia. Still, race organizers expect a field of comparable strength to 2009, when world champions and former winners of the Tour de France and Paris-Roubiax lined up alongside America’s best riders.

In 2010, confirmed riders include seven-time Tour de France winner Lance Armstrong, who had been wrestling with the decision of whether to ride in California or at the Giro next May. He will be joined by RadioShack teammate and three-time winner Levi Leipheimer, national road champion George Hincapie (BMC) and national time trial champion Dave Zabriskie (Garmin-Slipstream).

Here are the route details:

Stage 1: Nevada City to Sacramento.
The 78-mile stage will put riders back into Sacramento where the race caravan will have been staying in the days before the race. Expect a sprint finish.

Stage 2: Davis to Santa Rosa.
Somewhat of a repeat stage from 2009, but perhaps a little longer and a little harder. It may or may not have finishing circuits. Organizers are looking to put a hill in Santa Rosa to give someone else a chance to win it. Plus, it’s harder for Santa Rosa to do circuits on a Monday and shut down all of downtown. Trinity Grade may figure into the route.


Stage 3: San Francisco to Santa Cruz.
Another repeat from 2009, this stage will again feature the Bonny Doon climb, where this year Levi Leipheimer attacked his way into the race lead. The stage will start at pier 30/32, then it will follow the Bay to Breakers running course from two days earlier, across the spine of the city and into Golden Gate Park. There will not be a Golden Gate bridge crossing this time, however.

Stage 4: San Jose to Modesto.
A sprint finish is pretty certain, as there is no way to get to Modesto without traversing 25 miles of dead flat central valley.

Stage 5: Visalia to Bakersfield.
The first and only real Sierra Nevada stage, this day will take riders up into the Sequoia National Forest. It could be somewhat similar to the Merced-Clovis stage from this year. The proposed finish near Bakersfield College consists of a 2-mile circuit with a 200-foot climb in middle.

Stage 6: Pasadena to Big Bear.
The queen stage will include 13,000-14,000 feet of climbing up to one of the ski resorts in Big Bear. Race organizers are waiting on clearance from the state because parts of the route include areas affected by the Station Fire. If the Forest Service gives clearance, the race would do 2.5 hours through the burn zone. From the start in Pasadena, riders will climb up to Crystal Lake, summiting there at 8,000 feet, then descending into Wrightwood and climbing back up to Big Bear Lake.

Stage 7: Los Angeles time trial.
Originally, the plan was to start the time trial start downtown and go to the beach. The LA Triathlon used a similar route and the city concluded the traffic impact was too great. So, the time trial will take place entirely downtown, visiting Disney Music Hall, Staples Center and the Exposition Park. It will likely be a two-lap course.

Stage 8: Thousand Oaks circuit race.
The race will conclude with a circuit race in the Santa Monica Mountains. There will be at least one canyon climb over the top of mountains and a drop down to the Pacific Coast Highway. SoCal roadies can look for the Rock Store climb to be featured.
Posted by Recovox at 9:01 AM